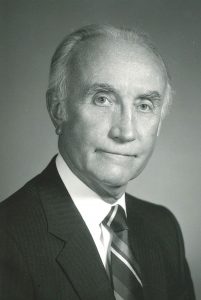 Bill was a decorated WWII Army Veteran, serving in the Pacific Theater. He was a proud graduate of MSU where he was a Ralph Young member as well as a member of the Sigma Alpha Epsilon fraternity. Bill was the Vice President and the Secretary Treasurer of the Capitol Savings and Loan. He also was very involved in Shriners International, where he served as Head Potentate. He was a member of Masonic Lodge, as well as served on the board of directors at Lansing Board of Water and Light.

Bill is survived by Wanda whom he has been happily married to for 72 years. He is also survived by his daughter, Susan (Kevin) Reynolds; son William VanHoesen; grandchildren, Jenniffer, Todd, and Jay; and great-grandchildren, Nevaeh, Isaac, Savannah, and Axel.

There will be no services. In memory of Bill and in lieu of flowers donations may be made to your local food bank, or Michigan Chapter of the American Cancer Society. Arrangements are by the Estes-Leadley Greater Lansing Chapel.

I was hired by Mr. VanHoesen and worked at Capital Savings & Loan for many years as a teller in front of Mr. VanHoesens office. Later I worked for the State of Michigan. Over the years had different bosses and always missed Mr. VanHoesen he was the best boss I ever had we all respected and loved Mr. VanHoesen. He always talked about his family his great wife and so proud of his son & daughter he brought his sons metal from the service to work and proudly showed all. God Bless You all!

Bill hired me back in l976, and was my boss when I was the Director of Human Resources. Capitol Savings was a great place to work, and a lot of that was attributed to Bill. I think everyone who worked there has a great memory of Bill. I visited him and Wanda several years ago when they were at Grand Haven Manor. It was great to see him, and he seemed like the same old Bill – up-beat with a joke to tell. My condolences to the family.

Bill was my neighbor in Lansing Township. He and his wife Wanda let my three children, as well as many others in the neighborhood, swim in their pool on hot summer days. Bill and Wanda loved to party and Bill would tell his “diesel fitter” joke to any new attendee. I just learned today of his passing. I am in Florida and wish to express my condolences to his children and grandchildren. I banked at Capital Savings and worked across the street in an office across from his bank so I got to know him well after he moved to Ravenswood. My family and I have many fond memories of Bill.