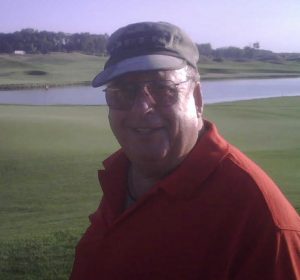 William John Prout, born to Oscar and Violet Prout in Lansing , MI on May 28, 1943, peacefully passed away on January 25 with God and his family by his side.

Bill is survived by his wife, Kathy, of 52 years and three children, Janet Bentley (Russ), Michael Prout (Kathryn) and David Prout (Mikki), 9 grandchildren and 6 great-grandchildren.  He is also survived by his brother, Doug Prout.  He was preceded in death by his sister, Margaret Prout.

Bill grew up in Lansing, MI, attending Otto Middle School and was a multi-sport athlete at Sexton High School.  He went on to play football at the University of Wyoming with a B.S. degree in teaching.  He went on to serve in the US Army and retired from Fisher Body.  His joys were coaching football at Sexton High School, vacationing at Torch Lake and spending time with family and friends.  Bill always enjoyed seeing his former football players, old high school friends, and work buddies.  Bill will remain forever in the hearts and thoughts of those fortunate to have known him.

His family will receive friends at the Estes-Leadley Greater Lansing Chapel from 5:00 – 7:00 p.m. Thursday, February 4, 2021.  In lieu of flowers, memorial contributions may be made to Central United Methodist Church, or to the charity of one’s choice.  Online condolences may be left for his family at www.EstesLeadley.com.

Dear Aunt Kathy, we are so sad to hear of Uncle Bill’s passing. We know he is now at peace and that he fought long and hard, but we will certainly miss him and his sweet smile. Much love and prayers to you and your family during this time. I’m sure we will see you soon.

Aunt Kathy – We are holding you, Janet, Michael, and David in our hearts with so much love. Hoping Uncle Bill has found friends and family from days gone by and that you can rest a little easier knowing he has found peace.
Love you,
Cindy and Larry

Janet and family, we are so sorry for the loss of your father. My prayers for God’s comfort for you all. Remember all the wonderful memories you have, they last forever in our hearts.

My thoughts and prayers are with your entire family. I’m so sorry for your loss. I pray your good memories and God’s peace will bring you comfort.

Kathy, I’m so sorry to hear of Bill’s passing. Wish I could be there to give you hugs and love. Know that I’m thinking of you, Janet, Mike and David and that you are all in my prayers.

My condolences to Bills family and friends. As a classmate at Otto and Sexton I had the pleasure of knowing Bill. He will be missed.

Dear Kathy and Family. I am so sorry to hear about Bill. He was a wonderful man and I so enjoyed talking with him. Great times were had on Gordon Street for many many years. I will never ever forget Rusty running down the street to visit you guys wether I was going away or not. If I ever couldn’t find her, she was on your front porch. I know Bill will be talking to Russ Maples and Rusty’s name will come up.

Kathy, you know we are holding you in light and love. So sorry.

Bill was such a sweet, kind person with a laugh that I will never forget! We are all so lucky to have had him in our family. Sending all our love to all of you!

My thoughts and prayers to the family.

Coach Prout will always be remembered. It was a privilege to be coached by him and a even bigger pleasure to coach along side such a caring man. I learned a lot about coaching because of him.

god bless you all

Kathy I was so sorry to read about Bill. My thoughts and prayers are with you and the entire family.

Kathy My thoughts and prayers are with you.

Michael and Kathryn we are so sorry for the loss of your father. We did not know him, but we pray his memory will be eternal.
Nick and Karen Colovos

Michael and Kathryn and family, We are so sorry for your loss. He sounded like a wonderful man, and May his memory be Eternal.

To Dave and Family,

My heart and prayers are with you. Coach was very influential to us all who played for him at Sexton. I have always been told God only picks his flowers for his garden when he is ready. #BigReds4Life

So sorry for your loss. Bill always brought a smile to my face and still does as I remember his infectious smile and laugh. We were so fortunate to have him as part of the BIG RED family! My sincere condolences.

My heartfelt condolences to Bills family I worked at Fisher Body and Sexton with him and always admired him I always looked for him at games and I know former players did too, prayers for family he will be missed Rick and Suzanne Carpenter God Bless

I had the privilege of playing for Coach Prout in 1978 at Sexton. He was an awesome coach! I greatly appreciate the investment he made in me, my teammates, and so many others throughout the years. I was also a classmate of Janet and old friends with the Lynch twins. I am so very sorry for your loss!

I had the priviledge of growing up with the Prout family, in church and at school. Also played basketball at church with Mike and was friends with Janet. They are a wonderful family. Bill was a person like my dad, hard working, great coach and a wonderful person. I am so sorry for your loss, praying for your family.

Thank you for everything coach. We love you and we are all better for knowing you.

Dear Aunt Kathy, Janet, Michael, David and families.
Bob and I are so sorry about Uncle Bill. We have many happy memories of all of us together and will always remember and find love in those memories. We send you our sympathy and love, praying for you all in this sad time.
Love,
Barb and Bob

The Prout Family has my thoughts and prayers as I remember them as good neighbors from the good ol’ days. I am sorry for your loss.