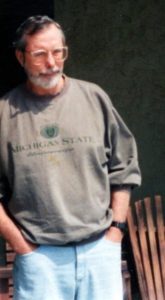 A born adventurer, Bill spent his youth traveling the world. He spoke most fondly of his years in the U.S. Virgin Islands where he bartended on the beach. In 1977, Bill joined General Motors as a lineman, from which he retired in 2000. Bill married the love of his life, the former Pamela Quarles, on November 23rd, 1994 in Las Vegas, Nevada. Bill and Pam were avid Spartan fans and held season tickets for several years.

Bill was preceded in death by his beloved wife; his parents; brothers, James, John and Robert Mahaney; and sister, Donna Wenzlick.

4 Messages to “William A. Mahaney”

Bill was a GREAT FRIEND, We had a lot of good laughs and a lot of good BEERS together. This one SPARTAN FAN that I will miss a lot this year. SATURDAYS were FOOTBALL DAYS. GO GREEN. REST IN PEACE ,MY FREND.

Bill lead an extraordinary life – the kind you read about in stories. He was also an incredible grandfather and my lifelong hero. I will miss him dearly.

I will miss you Bill, we had a great time working together at Sargent Construction Co. back in the sixties