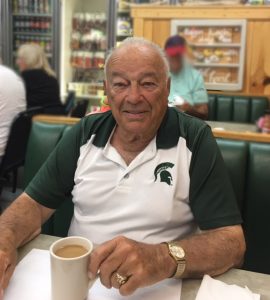 Bill grew up in Cadillac, Michigan, and was the oldest of five siblings; Jim, Jerry, Robert (Deceased), Pat (Deceased).

Bill retired from General Motors after 40+ years of service. He enjoyed hunting, fishing, camping, bowling, and spending time outdoors. He was a generous man who enjoyed helping others. He loved his family and was a devoted father, grandfather, and great-grandfather. He will be missed greatly by all.

In lieu of flowers, contributions may be made to the Morley S. Oates Post #701 VFW.

Our many thoughts and prayers are sent to you in the loss of your Father, Grandfather, and Great Grandfather. May you know that he is at PEACE.

Debbie, Pam & Kevin. Mydeepest sympathies in the loss of your dad ( my Uncle) He was a great man. I have the greatest memories growing up as a kid spending time down at his house, camping & fun at Dayoff lake etc. Glad I was able to see him at Pam & Gary’s campsite the last 2 years when he came up to Traverse City to visit and spend the weekend with them. He was a great man. He served his country & loved his family dearly I’ll miss him. Love you Uncle Bill. Dianna ( Nicholas) Haines

Pam, So very sorry to find out about
your dad’s passing. Thinking of you!!! Wish I was there.
Linda

Pam, The last time I saw your Dad was at Theo,s rsatrant. I met with friends on Monday morning for coffee and he would be there with his friends. Too many years ago. I hope he had a good life. I’m impressed by his service record. Also by this beauiful message of his life you shared with us.God’s blessing to you and Deb and Kevin. Shirley Robert