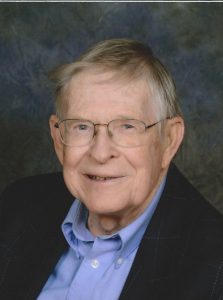 Dr. William E. Coté, of Lansing, MI, a retired journalism professor who influenced the careers of hundreds of Michigan State University students and a member of the Michigan Journalism Hall of Fame, died Monday, August 30, 2021, at age 81.

Bill was born July 14, 1940 in Jackson, MI, the son of Mervin and Maybelle (Crosthwaite) Cote. He graduated from Jackson Community College and earned his bachelor’s, master’s and doctoral degrees from MSU.

Bill was a conscientious, highly respected, ethics-driven and consummate practitioner of journalism for newspapers who began his career at the Grand Rapids Press and Ypsilanti Press, moved to the Booth Newspapers Capitol Bureau in Lansing and joined the MSU faculty full time in 1986, retiring in 2003. His tenacious but fair reporting won awards from the Michigan State Medical Society, Detroit Press Club Foundation and The Associated Press Managing Editors Association.

As an educator and mentor, he transformed Capital News Service from a pilot reporting program to one of Michigan’s most widely read sources of fair, balanced and accurate news about state government, politics and policy.

Earlier this year to mark the 40th anniversary of CNS, several alumni described Bill’s impact on them. One wrote, “Bill Coté taught me how to tell stories. And how to brush away the unimportant details in a hurry to meet the all-powerful deadline. And how important it is to get the facts right.” Another said, “He was the kind of person who not only gave advice, but followed through on helping me follow it.” Yet another wrote, “He literally changed the trajectory of my life.”

As a researcher, he was a pioneer in the study of coverage of victims of crime and violence and co-founded the internationally recognized Victims and the Media Program, an achievement that won him recognition from the State Senate.

As a leader, he chaired the Michigan House of Representatives Press Committee, served as a long-time officer of the Mid-Michigan Professional Chapter of the Society of Professional Journalists and championed freedom of information.

Bill was a 33-year survivor of a Liver Transplant which he received in July of 1988 at the University of Wisconsin, in Madison, WI.  Bill had a variety of interests, including ham radio and research into novelist Ernest Hemingway’s under-appreciated journalistic career. He was active in Mount Hope United Methodist Church, where he first met his beloved wife, Donna. He also taught an adult Sunday school class there for many years.

Bill was preceded in death by his parents: Mervin and Maybelle (Crosthwaite) Cote; 2 brothers, Donald and Gloria (Doleski) Cote and Gene and June (Hicks) Cote; and one nephew, Scott Cote. He also lost the love of his life; his wife, Donna E. (Lawrence) Coté who died in 2013. He is survived by his niece, Lugene (Cote) and Keith Broxholm; nephews, Mark Cote, Collin and Darla (Gormley) Cote and Wally and Shawn Cote; and brother and sister-in-law, David and Nola (Lawrence) Meade.  He is also survived by many great-nieces and nephews, and special “adopted” son and daughter: Ed and Sue Bryant, their children: Major Kate Bryant, and Alex and Casandra Bryant and great-grandchildren Oliver and Ophelia Bryant.  Bill will be missed by all his friends and especially his caregiver Roslyn (Jackson) Personius.

Memorial contributions may be made to:  Mt. Hope United Methodist Church in Bill’s memory.

Our deepest sympathy to Bill’s family and friends.

Bill was a true gentleman in every sense of the word. It was a privilege to have known him. Sincerest sympathies to his family.

Being my cousin-in-law, I was always conscious how I wrote letters to him. He always said to not worry about it, just send letters which I did. I always enjoyed our conversations and our fun teasing about who was better, Michigan State or University of Michigan. Sincere sympathies to his family.

With deepest sympathies to Bill’s family and friends. It was a privilege to have known him. He will be greatly missed by those who knew him.

It was great and a blessing to have met Bill. As members of the radio amateur community, Hams for Christ, We communicated often. And also in personal visits. I praise the Lord Jesus that He redeemed Bill and now Bill is in His Presence forever.

Bill was a good friend. He was very active on the Hams For Christ Christian Fellowship Net. He was always a joy to talk to, and a very helpful Christian Brother. We never got the chance to meet him, since we live in Northeast Florida, but I know it would have been a joy to do so. I am sure that he is now living in Heaven, and enjoying being present with the Lord.

Wow I just saw this!!!! I’m devastated!!!! Bill was one of my customers of my heating and cooling business. I’m am so sorry to hear he passed. He was one of my favorite customers. Always was glad to talk or see me. Never complained and always had a smile on his face. Rest In Peace Bill!!!! You were the best!