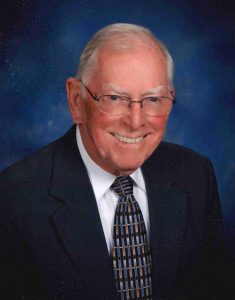 On Wednesday, April 1, 2020, William M. ‘Bill’ Cleary, a proud PE and Spartan, endearing father, grandfather and husband, passed away of heart failure at the age of 89. Bill was born November 13, 1930 in Milwaukee, Wisconsin to L J ‘Pete’ and Ethal (Mackey) Cleary. He was a graduate of East Lansing High School and went on to earn a BS in Mechanical Engineering from what was then Michigan State College in 1952. He served in the U.S. Army from 1952 to 1954, being honorably discharged as a 1st Lt. Bill married Maxine B. Barlow, a Wolverine, at the Michigan State University Memorial Chapel on October 26, 1963 (The MSU – UofM Football game ended in a tie that year).

He settled into a career of public service becoming employed by the Michigan Department of Public Health, Division of Occupational Health for 40 years, contributing in various capacities both as a Certified Industrial Hygienist and Professional Engineer (PE). While with the division he obtained an MBA from Michigan State University in 1989. He retired as the Division’s Deputy Chief in 1993.

Bill served as a first responder to and investigator for the Lake Huron Water Supply Project tunnel explosion in Port Huron in December of 1971; 22 employees died in this event and it remains as one of the deadliest industrial accidents in Michigan history. Bill’s professionalism and attention to detail embodied itself at the end of the accident investigation. Before the advent of cell phones, he had to be tracked down by the Kentucky State Police, cutting short a vacation in that state, because the general contractor would not recommence the project without him present.

Both in his employment with the State of Michigan and in his retirement, Bill was active in his profession. He served as a member of the ACGIH Industrial Ventilation Committee for 29 years (1976- 2006) including serving as its Chair from 1978 – 1984. He was active with the Michigan Industrial Hygiene Society, edited the Industrial Ventilation Manual of Recommended Practice for Design, taught at the Michigan Safety Conference, the annual industrial ventilation conferences in Michigan, Washington, and Alabama, was theinaugural recipient of the annual ‘Duck’ Award (after an unfortunate brochure typo), among many awards, and mentored many industrial hygienists and engineers.

His profession of improving the work environment for Michigan’s citizens led him to become the only community member of the Institutional Animal Care Use Committee, a position he held for decades. This group monitors the ethical treatment of animals in Michigan research labs.

Bill also put his concern for all of God’s creations into action as a 46-year member of Eastminster Presbyterian Church where he served multiple terms as an ordained Elder and Deacon. He was, of course, a standard-bearer on the building and grounds committee, often ‘employing’ his two sons to mow the several acres of lawn, crawling through tight ceiling spaces to replace fan blower belts, or hanging from the ceiling to replace light bulbs (yes, sometimes ‘OSHA’ did not translate well into his personal life). He participated in many mission trips with church youth, college students, and adults, including the ‘Heifer Project’, trips to Appalachia, and to the Yucatan Peninsula, going where he could both learn from and work with others to confront justice issues such as hunger, poverty, and discrimination. He led Eastminster’s

work with Habitat for Humanity and served in several capacities with the Lansing Housing Coalition, and Action for Greater Lansing.

Bill also had an avid interest in another of God’s great creations – cars. He enjoyed talking about, reading about, driving, looking at, and fixing cars. Although he admired many fine vintage automobiles he reserved most of his affection for El Camino’s, S-10 Pickups, and Chevettes, the last much to the chagrin of his sons during their teenage years who had hoped he would gravitate to another kind of ‘vette.

Bill did find some time to pursue other interests, particularly travel – with the encouragement of his wife. He visited all 50 states – being persuaded to park the car for a trip to Hawaii and a cruise to Alaska. He was also persuaded to travel to Japan, Hong Kong, China, Spain, Russia, and the British Isles to name just a few.

Bill was preceded in death by his parents, sister Carol and brother-in-law Paul Lucas, brother-in-law James Norsworthy, and brother-in-law Robert Hall. He is survived by his wife of 56 years, Maxine, sons Michael (of Lansing), and Patrick (Kerri) Cleary (of Howell), grandson Kelly (Heather Kotalik) Cleary (of Holly), and great grandson Lincoln Cleary (and his brother Kaeden). He is also survived by his sister Patricia Hall (Northville), sister-in-law Diane Norsworthy (Rochester Hills) and many cousins, nieces and nephews.

Our family would like to especially thank Tim Sloan, PA, Dr. Eugene Choo and the staff at Lansing Cardiovascular Center; Chris, Joan, Edith and Ruby from Michigan Premiere Hospice; Maggie and the staff of Independence Village East Lansing, Laurus Home Care, and Progress At Home for their compassion and care these past several weeks and months.

A memorial service will be held 1:00 p.m. Saturday, August 14, 2021, at the Eastminster Presbyterian Church, with a visitation to follow. Masks are required for all those attending. The family is being served by the Estes-Leadley Greater Lansing Chapel. Those desiring may make contributions to Eastminster Presbyterian Church, East Lansing, in memory of Bill Cleary (he really wanted the elevator to be paid off).

Our family takes comfort in the fact that when we meet him again there will be our father in that bright green sport coat with a wide grin and a story to tell. Until then he is playing the front nine, enjoying a small McDonald’s black coffee resting in his pull cart, putting for birdie.

I’m thinking of you, dear Maxine, with tender thoughts and prayers.

Maxine, I’m praying for comfort and peace for you and your family.

Maxine, so sorry to read of your loss. Although I never met your husband, he sounds like a winner. May you enjoy the many happy memories.

Sending prayers for comfort and peace at this difficult time.

The Joe and Audrey Cleary family have so many fun memories from our visits in Escanaba! May Bill rest in peace.

I am very sorry for your loss, and very privileged to have know Bill.

Hi Maxine,
Thinking of you during this difficult time. May you’re many happy memories bring a smile to your face every day.
Hugs,
Pam

Sorry for your loss. What an active and fulfilling life, and the blessing of family generations to carry that spirit ahead.

Maxine I am so sorry for your loss and the loss we all will feel without Bill around. He was quite the conversationalist and I will miss his words very much. Prayers for comfort and peace to you and your family. Hoping you’ll find peace in his many memories. Hugs, Patti

Maxine, I am sending love and prayers to you for strength. I am confident your faith will help you all through this loss. Thank you to the Cleary family for such a beautiful obituary. I am confidant it was a collaborative effort. From your words I realize Bill lived his life working with others, trying to make the world a better place. This is such a beautiful example of a life well lived.

Dear Maxine, I am so very sorry to hear of Bill’s passing. What a wonderful legacy he leaves and so many lives he has touched. My heart is with you and wish for you what comforts you the most.

With love and sympathy, Rosalyn

Dear Maxine and Family,
Our thoughts and prayers are with you at this difficult time. William’s service for our country is greatly appreciated. May there be peace and comfort in cherished memories along with the eternal promise…that he has stepped onto the shore of heaven and has been welcomed by the loving hand of God.
“Cast thy burden upon the Lord, and he shall sustain thee.” Psalm 55:22 KJV

Maxine, Sending you prayers for comfort and peace at this difficult time. I never met your husband, but this is a beautiful memorial. He definitely lived a full life with an emphasis on service for others. Such a blessing of wonderful memories.

I have very fond memories of you and Bill and your participation in Action, and seeing you at our MLK Breakfast. I’m forwarding the information you sent to people from Action. I’m very sorry I won’t be able to attend the Memorial Service, because our baby granddaughter is being baptized that day in northwest Indiana.