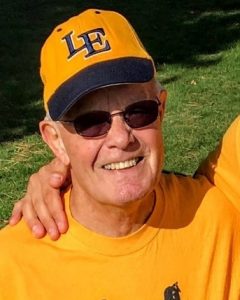 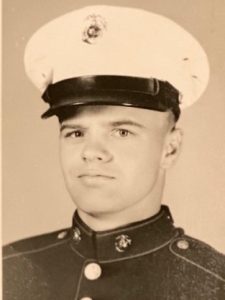 Bill graduated from Lansing Eastern High School in 1955 and was inducted into the Lansing Eastern High School Sports Hall of Fame as a member of the 1954 State Championship Wrestling Team. After high school, he enlisted into the United States Marine Corps  (1956-1962), and was stationed in San Diego, CA and Iwakuni and Okinawa Japan and the Philippine Islands. After returning home, his brother Ed, who was teaching at Haslett High School, arranged for a blind date for Bill with Haslett’s librarian/ English teacher.

Bill and Sue’s first date was an indoor track meet at Jenison Field House at MSU. They were married the next year. In the early years, Bill worked at several jobs: Lansing’s Vector Control, night custodian at Horsebrook Elementary School, even cut tree limbs, but…after falling about 15 feet inside a tree…he realized he wasn’t adept at that line of work! With his growing family, he started taking classes at LCC while working at Diamond Reo and for the next 10 years, he balanced work and college studies.

After proudly graduating from Michigan State University with a degree in Secondary Education, Bill hired into the Lansing School District and taught Physical Education, Government and History and coached several seasons of Varsity Swimming and Track over the course of 25 years.  Bill taught at Harry Hill High School, Gardner Junior High School and Otto Junior High School, where he eventually retired in 1998.

Throughout his 60 year marriage with Sue, running became a big part of their active life. Bill was involved in the formation of the Mid-Michigan Track Club, and ran with them for many years. Over the years, Bill, Sue and the family ran in road races all around the Greater Lansing Area, including Lake Lansing, Capital City River Run, Volkslauf, Hubbardston 10K, Carson City, Race for the Place, Walk-Wheel-Run, Lions Club, Bobby Crim 10 Mile and an all-time favorite, Mackinac Island 8 Mile Road Run.

The last 19 years you could find Bill at the Indian River Campground where he and Sue parked a camper and enjoyed day trips to Mackinaw, Petoskey or wherever they decided to wander. Their biggest joy was being with family: Bill was fortunate to have close ties to his brothers, Clayt, Ed, Dave and sister MaryAnn as well as with their extended families, breakfasts on Mondays, and Taco Tuesdays that sometimes included a grandchild or two, or a nephew or two. Pride grew in seeing grandchildren and great-grandchildren enlarge the circle of love.

Bill’s love of family was what framed his character. The hugs and smiles and “get a move on!” (yelled at any given cross country meet) were what filled him up and were  returned to him ten-fold by his children, grandchildren, and great-grandchildren, including baby Elizabeth who was born five days before he passed away.

He was a friend to all, easy-going, approachable, always a kind word to offer whoever stopped to talk. He will be missed by not only family, but to those whose lives he touched along the way through coaching, teaching or in the neighborhood.

We will miss him forever.

9 Messages to “William A. “Bill” Townsend”

Townsend/Lynch Family,
I’m deeply sorry to hear of this news, and I will definitely keep your family in my prayers. Bill was a kind man with a big heart, and I know he will be missed. My deepest condolences to you all. God gained another great angel.

We are holding all of you in our hearts at this sad time. Our sincerest sympathy.

Mr. Townsend was my 7th grade teacher at otto middle school he was a great teacher. R.I.P Mr. Townsend.

I am so sorry. I will pray for you. Would love to see you.
Pat Schaible

Jerry and I were so sorry to read of Bill’s passing, and I wanted to let you know that we are so touched by your loss and will keep you in our prayers.

Very sad to see of your obit. I will miss our friendship in our teen days and beyond. We will renew our time together with God and Jesus in paradise. amen

Our deepest sympathy. We will miss seeing Bill in the neighborhood and at the local running events.

We’re all going to miss Coach Townsend. Our best to the Townsend/Lynch family as you deal with his loss. Some of my fondest memories of being the parent of an Eastern H.S. cross country runner (Austin Muylle) was standing on the sidelines with coach Townsend. He would be yelling the loudest to support our team members as they ran by and then he would turn to me and say “now what Austin needs to do if he’s going to get up with the lead pack is…”

Bill Townsend was a beloved presence in the realm of Quaker sports and a good friend to many. We will remember him. Dave Muylle & family

I moved back to the Lansing area in 1985, after having been a student/runner at MSU in the early 1960s. Into my running to the hilt, I was running marathons and ultramarathons, but liked a change of pace by running shorter runs with the Mid-Michigan Track Club. I knew Bill as a guy who was certainly not a gifted runner, but the more I showed up for the Club runs, the more I sought him as a relay partner. I chose him not at all because he could help me be on a winning team, but mostly because he was a damned nice guy. I’ll miss the talks he and I had about teaching, about how it was becoming a tough job, but also about how much we loved kids. Bill, it has been a privilege knowing you.