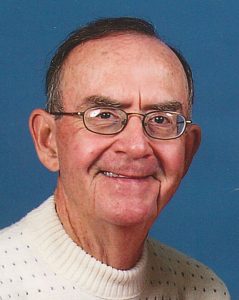 Travis Eugene Fairchild was 86 years old when he passed away on September 3, 2022, after battling a rare neuro-muscular degenerative brain disease.  Travis was born December 17, 1935, in Janesville, Wisconsin, to Eugene and Leona (Schultz) Fairchild, and his family moved to Beloit, WI shortly thereafter.  He graduated from Beloit Memorial High School in 1954, where he was very involved in ROTC.  It was then that Travis enjoyed helping on his father’s farm in Illinois and at his father’s shingle company.   Travis went on to earn a BBA from Milton College in 1960 and began working in the accounting department at the General Motors Assembly Plant in Janesville, WI.  There he met Ginny Gray of Milton, whom he married on September 16, 1961.  During that time, Travis served his country in the U.S. Army Reserves from 1960-1966.

In 1970 Travis was transferred to Michigan where he worked at the GM Commercial Accounting Center in Southfield, MI as a systems analyst, later working at the GM Tech Center in Warren, MI, until retiring in 1990.  Travis worked very hard to provide for his family, all the while living in Farmington, MI.  Travis and Ginny then relocated to Holt, MI, and started wintering in Ft. Myers Beach, Florida.  He enjoyed gardening, helping his friend Joe farm his land, spending time with friends, playing card games and chair volleyball, as well as dancing with his wife.  Travis loved being outside, and his favorite thing to do was ride his bike every day.

A memorial service will be held at 2:00 p.m. Sunday, October 9, 2022, at the Estes-Leadley Holt/Delhi Chapel, where military honors will be provided by the U.S. Army.  Casual attire is requested.  Online condolences may be left for his family at www.EstesLeadley.com.

Will forever miss seeing Travis ride his bike. Much love

Ginny, Bob and I are so sorry for your loss. We loved Travis, had many good times together. We will miss him. I wish we were there with you to help you ease your sorrow.
Our condolences to you and your family. Lots of love and prayers are going out for you.
Bob and Anita.

We are so very sorry for your loss. Sending prayers, hugs, and love, to your entire family
Deanna, Mike, and Faith Walters

Sending love and hugs to you all! May the wonderful memories you have of him carry you through difficult times!

Scott and family,
We are sorry for your loss though thankful for such a nice recent visit! Much love from LeeAnn Thomas

Prayers, love and hugs to you all! It’s not easy to loose a spouse or parents. I can’t imagine the pain you are feeling…but I know grief is different and hard on everyone in different ways. I will look through old bday pictures and will share when I find them! God bless each of you and give you the rest that you need! Take care of you ! Wendy

So sorry for your loss. Sending you all love and peace during this difficult time.

So sorry for your loss, sending lots of prayers and love your way. May your dad Rest In Peace.

GINNY, my heart breaks for you and your family. I will forever remember Travis as a sweet gentle soul.I know you are blessed to have wonderful memories, may they bring you all comfort.Much love and prayers for you all.

Ginny and family. So sorry for your loss.
Always a cherry “Hello” and a big smile.
A regular on his bike throughout the park and playing cards.
Great memories ! May Travis Rest In Peace.

Remembering all the wonderful times we’ve had together. Some people bring so much light into this world and Travis was certainly one of them. We will always miss him. Keeping you and your family in our thoughts and prayers, Ginny. Love you, from Susie & Steve Kaufman

Thinking of you at this difficult time. My deepest condolences to you, Ginny, and your family.

Our deepest condolences to Ginny and her family. Travis was a long time friend dating back to Milton High School and he will be sorely missed. God Bless.
Ed and Karen

Ginny, sending my love. I can’t imagine the sorrow and emptiness you have. I will miss seeing Travis across the net enjoying the chair volleyball he loved so much.

Ginny, we are so sorry for your loss. Our prayers go out for you and your family. May Travis Rest In Peace.
Joyce and Marc Miller

Ginny. You are in our thoughts and prayers as you as you deal with the loss of Travis. May you be surrounded with love and comfort from friends and family.

Ginny,
Our thoughts and prayers are with you and your family. We met you and Travis at ICP, we were friends of Dave and Gail Taylor. I was amazed to see that Travis was 86. He surely never showed his age and was so active with his bike riding. We will always remember him.
Jim and Elaine Bolthouse