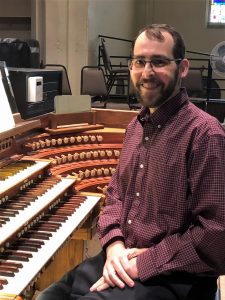 Tim was born to Patrick and Cecelia (Martin) Costigan. He graduated from Waverly High School and Michigan State University, and in May 2021, he completed a Master’s in Sacred Music-Organ from the University of Michigan.

Tim was a lifelong musician, playing piano at an early age before taking up the pipe organ in his teens. He started as an organist at St. Gerard Church when he was 16 years old, and eventually that is where he met his future wife. As a student, he worked part-time for the Fowler Organ Company, where he helped rebuild the Casavant Frères organ at St. Mary Cathedral in Lansing. In 2016 he became the Cathedral’s Director of Music, proudly playing the organ console as if it were built for him.

Tim loved being with his family. He also loved cars, and he used his technical skills to help family and friends with electrical and plumbing, calling the completed projects a thing of beauty.

He is survived by his wife Rachael Drenovsky and his son Ian; his parents; his siblings and their spouses Thomas and Megan Costigan, Cathleen and Steven Edgerly, Edward “Ted” and Mary Costigan, and Matthew and Heather Costigan; 12 nephews and nieces; and aunts, uncles, and cousins.

Visitation will be held at St. Mary Cathedral, 219 Seymour Ave., Lansing, from 4:00 to 7:00 p.m. Tuesday, August 17, 2021.  The Funeral Mass will be private. Livestream link. Private interment will take place in St. Joseph Catholic Cemetery. Memorial contributions may be made to the St. Mary Cathedral Organ Fund. Arrangements are by the Estes-Leadley Greater Lansing Chapel.

Rachel, I am so sorry for your loss. You and your entire family are in my prayers.

Our heartfelt condolences go out to all of Tim’s family during this very difficult time..We hold all of you close to heart and pray for the The Lord’s comfort and peace to cover you everyday ..

Rachael: Mike and I are so very sorry. Tim was such a wonderful man. Please know that we have been praying for you and will continue to pray for you. May Tim rest in the arms of Jesus. I pray that St. Joseph will draw near to you and Ian especially during this time but for every day of your lives.

Dick Trierweiler Sorry for your loss

Tim was a beautiful soul, a warm friend to everyone, unfailingly positive, and deeply committed to his family, his church, and his art. All of us at the University of Michigan are honored to have known him. We’re thinking of you.

So sorry to hear of Tim’s passing. He was a kind and gentle soul. He will be greatly missed. Our thoughts and prayers are with you at this time.

Dan and Lauren Phillips and family

Rachel, so sorry for your loss. Praying for you and Ian. Tim was always such a nice guy. I remember him mostly from Saint Gerard, but then again recently at drop off and pick up at STA. His personality never changed from when we were at Saint Gerard. Just always a nice, nice guy. May he Rest In Peace and may you and your family find strength and peace.

God bless Patrick and may he rest in his peace. May his memory be a continued blessing to his family and friends.

Our prayers are with you all during this most difficult time. We are so thankful for the beauty Tim brought to us with his giftedness and love of music. His passion for the liturgy has marvelously elevated our worship of the Lord at Mass for many years and we will joyously remember him in our hearts when we hear the organ play at St. Mary Cathedral. May you find peace and comfort resting in our Father’s arms.

Rachel, Ian, Cecelia, Patrick and all the family, Denny and I are so sorry for your loss. Tim was such a kind and caring person, he will be greatly missed. God be with you during this most difficult time. We are praying for you.

So sorry for Tim’s passing. Prayers go out to your family at this heartbreaking time for strength and loving healing during the days ahead. I remember Tim was very kind and welcoming to me when I joined St. Gerards. I will never forget his kindness. I feel very fortunate to have sung with him as a cantor while he was an organist at St. Gerards.

Praying for you all. Thankful to God for such a wonderful man who could share his musical talent with our parish.

So very sad. May Christ have mercy on his soul and bring peace to his family.

Dear Rachael,
You and Ian are in my prayers.
I was blessed to be able to be on staff with Tim at St. Mary Cathedral Parish and to have known him.
What a wonderfully talented and kind man- forever optimistic and warm.
May Jesus hold you and Ian close to His Sacred Heart and welcome Tim into the Eternal Heavenly Banquet.
Amen.

My sympathies to you, your family, and friends.

Tim was a masterful organist and director, blessed with a kind heart and generous spirit. I deeply appreciated the great gifts he offered for the glory of God. He will be so sadly missed.

May Tim be welcomed into the arms of our Heavenly Father and may all whose lives he touched experience the Lord’s consolation in the grief we share.

With my prayers and condolences,

Tim is such a wonderful gift to everyone who knows him. Personally, we valued his friendship. We were all fortunate to be able to experience his musical artistry.
Rachel and Ian, you’re in our prayers. Please take comfort in the journey you shared with him. Just think, he now plays his celestial organ for the choirs of angels
Jeanne and Turney Gratz

May the peace of God be yours, Tim. Rest in His glory. You will be missed.

Rachel and Ian, I am so very sorry for your loss. I am also sorry for the loss the cathedral has suffered. Tim was a great choral director and had developed so much in his tenure and as a result, we, too developed and became better. It was a privilege to sing for/with him. I know the days ahead will be difficult, and I encourage you to seek out Ele.s Place or a grieving center of your choice. They can help you through this very difficult journey. I hope to see you again soon, post Covid. Take care. You will be in my prayers.

Dear Rachel and Ian,
Our thoughts and prayers go out to you and your family during this difficult time. We are so sorry for your loss.

Dear Rachael, Ian, and Family,
You are in my prayers. I can hardly believe this has happened to our Tim. I am certain he is making music in Heaven for the Glory of God, just as he did here on earth.
I first knew Tim when I was a parishioner at St. Gerard, then when I moved near and attend St. Mary Cathedral. I enjoyed arriving early before Mass to pray and hear the beautiful music he played. I shall miss his talented, lively soul. May God, Blessed St. Mary and St. Joseph be with you now and forever.

Dear Costigan Family
We are so sorry for the passing of Tim into eternal life. We often try to reflect on the many blessings we have in our life, and we are thankful for the time we shared with Tim as the Director of Music for the Cathedral’s choir family. Those were great years singing with/for him, he will never be forgotten. May he rest in peace.

His earthly body failed him, but his spirit will remain with you always.

In his libretto for Carousel, Oscar Hammerstein wrote “As long as there’s one person on earth who remembers you, it isn’t over.” I hope you are comforted by the fact that many, MANY people will remember Tim, for many years to come. And anyone who saw them together, knows how young Ian adored his Dad. I hope you each find comfort whatever way you can; through prayer, or tears, visiting him at St. Joseph’s or just talking. Tim’s brave spirit lives on in you. For Rachael & Ian, Cecelia & Pat and all the family, I am so sorry this has happened. My prayers.

Dear Rachel
It’s like losing a brother. Our weekly chats at Steiner rehearsals though short in duration were always filled w love and good humor. I will forever keep Tim in my heart. May his memory keep you and Ian comforted throughout your lives.

My sincerest condolences to the family of Tim. I remember his gentle kindness as a Waverly choral student. I can see his wonderful sincere smile. I am so sorry for your loss

Your family has been in our been in our thoughts and prayers. Ian is in class with our son, Luke. “May God, the source of hope, fill you with all joy and peace by means of your faith in him, so that your hope will continue to grow by the power of the Holy Spirit.” – Romans 15:13

Rachel and Ian-
The suddeness of Tim’s passing makes his loss even more painful. Tim will be missed but never forgotten. Know that we will keep you in our prayers and thoughts every time we sing the Mass.