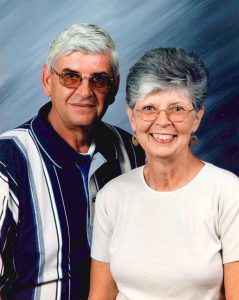 Terry was a graduate of Haslett High School. After high school he served in the Michigan National Guard, where he served during the Detroit riots. Terry worked for Sohn Linen Service as a Route Salesman, retiring after many years of service. In his free time Terry made many trips up north to the cottage where he loved to fish. He also loved going to the races at Spartan Speedway, enjoyed mowing the yard, and was known for smoking a good cigar. One of his greatest joys was attending his grandchildren’s sports events.

He was preceded in death by his parents, his wife of 37 years Vicki Fenn, a grandson Chad Hiner, and his mother-in-law Irene Stange.

There will be a memorial service held at a later date. Arrangements are by the Estes-Leadley Holt/Delhi Chapel

Worked with Terry for many years at Sohn Linen. Loved his sense of humor and got along very well with him.
Our sympathy to his family.

Thank you both. I know my dad was fond of you both.

Worked with Terry at Sohns, he was fantastic!
So sorry for your loss

So sorry about Terry! He was great friend and neighbor for 57 years, I’ll never forget him, that’s what is wonderful about memories. Sending you love and prayers.

Thank you Bonnie. My dad was blessed to have such great friends living close by.

New Terry well in high school. He lived just down the street. We in summers selling pop and candy at softball games to raise money for the Key Club. Remember his 49 Chevy, a ride to school many a days. Haven’t seen him since high school as I left the area. He was a great guy.

Thank you for your memories of my Dad.

We’ve been neighbors for the past 31 years. Mr. Fenn was a neighborhood staple and a neighborhood watch, on most pleasant days you could find him sitting in his lawn chair, in the front yard. We had many conversations, over the years, as I walked our dog, Oreo, past his house, almost daily. Oreo would cut across the neighbor’s yard to get a pat on the head and rest in the shaded, cool grass next to him. He will be missed and always remembered. Our deepest sympathy to the family.

Thank you for those memories of my dad.

We were neighbors of Terry and Vicki for quite a few years. Then years later we ended up on the same bowling league. My dad and Terry refereed high school football and basketball games together. Terry was one of the funniest guys I’ve ever met. Rest in peace!

Thank you for those memories of my dad.