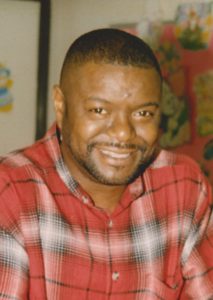 Most people that knew Terry would describe him as happy-go-lucky, humorous or light-hearted.  It would be a rare thing to not see him smiling or laughing.  For many people when they would hear the name Terry Boyd, they would most likely associate him with track and field.  During the years he competed he held the Lansing junior high school city record and championships for the 100 and 220 yard dash.  Terry was also the Summer League Jaycees state champion for the 100 and 220 yard dash.  For over twenty years he shared the national record for the 75 yard dash.

Terry was employed by the Lansing School District as a Custodian for thirty-four years (retiring in 2010, but later did substitute custodial work until 2014).  He held the positions of D Custodian, Elementary Day Custodian Assistant Head Custodian and ultimately Head Custodian.  As it turned out Terry had a real gift in working with children.  During the school year, if he saw a child getting picked on he would stop it and he became a safe haven of protection for many children down through the years.

He was truly blessed with unwavering support, unconditional love and a legacy that will live on forever through his beautiful immediate family. This love, support and true bond will hold strong until his very last breath.  After meeting the love of his life, Terry would go on to be married to Natalie for 31 years. Parenting over their wonderful daughter was one of his most treasured living experiences. As he felt much joy helping to guide Justine through all stages of her life and he never missed a step to be present when he was needed. Becoming a grandfather extended his heart even more than he ever thought possible. Jayden and Natalya’s Papa would be an everlasting presence in their lives from the very day they were born, and they treasured every encounter and all the memories they shared.

Terry loved to cook; and barbecuing was one of his favorite things to do; and like the smoldering coals of his grill that would eventually go out; so it is with the time that we had him with us; and even though his time has run out; we are thankful for all the memories that we have: and truly, he has left his lingering aroma in our lives!

Hello Justine: thank you so much. I appreciate the obituary for your dad. I have some medical issues as well which is preventing me from coming there. All I can say with certainty your dad loved you and he probably lived longer cause of his love for you particularly. Family as a whole was a highlight of his life. Pass this on
to Natalie et.al

Condolences to all his family. Terry was a very humble soul that I always enjoyed talking to back in high school. I had a great conversation with him at the 40th class reunion. What a wonderful obituary and I believe every word. RIP Terry.

Terry was a great person and loved everybody. Him and Champ (Frank Bradley) were like glue. I peddled papers with frank and deliver Terrys house. He will be missed. Prayers to the Family And boy could her run. 🙂

I will be praying for your family during this time. I was a teacher at North Elementary and had the privilege to work with Terry for many years. He definitely brought joy to our workplace and always had a smile for students and colleagues. We certainly missed him when he retired. May you find comfort in all your cherished memories.

i worked with terry and his brother Ervin Boyd for over 30 years, WOW!! lansing and his family have lose a great one, i used to belive Ervin was fast until he said go watch terry well buddy my heart go out to your beautiful daughterJustine and wife natalie and the entire family, gone but not forgotten. news was not that good sitting down reading the state journal this morning. PIP

I am so sorry to hear about Terry’s passing, but I believe he is safe in the arms of Jesus at this time. My prayers of peace and comfort go out for Natalie and the family. I have been knowing the Boyd family for many years, and have nothing but positive words to say about them. God’s blessings on you all!

Sending Prayers and My Condolences Out to the Entire Family!

My deepest condolences to Terry’s beloved wife Natalie, his treasured daughter Justine, and precious grandchildren Jayden, and Natalya, as well as the extended family. May his beautiful memories give you peace and comfort at this time and keep you in the days to come. Remember Proverbs 3:5-6 Lean not on your own understanding.
We are here for all of you.
Love You All

My thoughts and prayers are with the entire Boyd family. Terry’s infectious smile and easy going nature were his hallmark. He was a great co-worker and man. Godspeed Terry.

I’ll miss Terry’s smile, He always called to check on me. To the family and Aunt Christine my prayers.

We had the pleasure of working with Terry at North Elementary for years. He always had a smile on his face, had a great sense of humor, and cared about us.
He helped create that feeling of being a family versus just co-workers.
Our prayers go out to his family.

Our prayers to Terry’s family in hopes that his soul and spirit is before the Lord continually. And though I am blessed to have known Terry he never let on that he achieved those heights in sports as a young student in Lansing Area School District. He was always friendly and smiled most of the time. He will be missed.

I worked with Terry at North school. He always had a smile for everyone.He had a wonderful way with the children and staff. I will keep him and his family in my prayers.