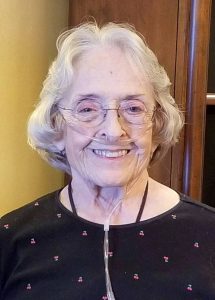 Susan Keiffer, most recently of Belmont, MI, was released from her years of pain on April 26th, 2022, at her home in The Oaks of Belmont Senior Living Community. Susan was born to Richard and Annis Witters in Kalamazoo, MI on March 1st, 1940. She joined her older sister, Caryl, who preceded her in death in 2020. Susan was also preceded in death by her parents, as well as her much loved husband, Dave Keiffer. Her surviving family includes her son, Todd (Janine) Phillips, her daughter, Lisa Atkins, and her stepsons Scott (Debbie) Keiffer and Doug (Julie) Keiffer. Susan is also survived by eleven grandchildren and thirteen great-grandchildren.

Susan was a graduate of Kalamazoo Central HS (1958) and received her AA from Lansing Community College. Susan began her working life in Kalamazoo, starting in the Business Office at Michigan Bell Telephone Company. She married Kirk Phillips in 1960 and had her son, Todd, in 1961, followed by her daughter, Lisa, in 1963. Following her divorce from Kirk, she moved to Lansing, MI in 1968 and she remained a resident until 2021. Susan left Michigan Bell during her brief second marriage, but returned later to work for many years as a Yellow Pages salesperson for Ameritech, while raising her children as a single parent. Following her marriage in 1988 to “the love of her life,” Dave Keiffer, she left Ameritech and worked for Dr. Neiberg in his office as a receptionist. Susan had to retire early due to a rare lung condition, bronchiolitis obliterans organizing pneumonia (BOOP). In spite of her illness, she and Dave loved traveling and spent many enjoyable hours in their camper and motor home.

Sue had several life-long loves; these were her family, all dogs, and music. She was known for her quick wit and her keen sense of humor, which usually come out as a sarcastic remark or observation. She genuinely loved meeting new people and made friends wherever she went. She could remember the names of everyone who provided her care over the years and usually asked after their children or pets whenever she saw them. Susan embraced people and enjoyed learning about anyone new who entered her orbit, whether at one of the facilities where she lived (Great Lakes Christian Homes, The Willows of East Lansing, and The Oaks of Belmont) or in casual conversation at an appointment or meal out.

In lieu of flowers, please consider donating to one of the following causes: Capital Area Humane Society (https://www.cahs-lansing.org/); or The American Lung Association (https://action.lung.org/site/Donation)

The day I met Sue, I knew I would have a forever friend!! She was extremely funny and made me laugh everyday. We all did some camping and loved every minute of it! I will miss our long chats catching up on everything going on in our lives. May you Rest In Peace Sue. Fly high with the angels!! Heaven has received a beautiful soul. Love you forever.

I just loved working with this woman and we were friends forever.

Dear cousin dear friend
thank you for sharing are growing up years as cousins in the WITTERS family
you were a couple of years ahead of me breaking trails for all of us
I loved and admired your quick wit
funny and maybe dirty jokes and always your willingness to laugh.
Now may you be at peace and healthy
sitting next to God and sharing funny stories
all my love
Cousin Ann.

My dear Crazy and fun cousin Susie, I will miss you forever. A few of us Witters cousins love to swear and she and I were the best,sorry.Laura. Susie was one of the strongest and loving women I know. God Bless you and your loving daughter and your son. Now you’re with your other loved family and your pets too. See you later”hopefully .” Cuzn K “ And I didn’t swear,wow!

Susie was my first cousin but also more like a sister. As mentioned in her obituary, she was one sharp gal with the comebacks and humor. We traded them often on out many phone calls and when we visited. I will miss her.

You’ll always have a special place in my heart Chickaleeta. We’re going to miss you dearly enjoy your reunion with Dave. Doug is going to miss his fart cards forsure.

Miss you, Sue! She always made me laugh, and I could count on her to give me good advice about anything. You’re missed at The Oaks.

Sue was one of the funniest and fun people I’ve known in my life! I loved her dearly. She was so much fun to work with and we had so many good times hanging out together at Yellow Pages. What a great sense of humor she had, and witty like no other person I’ve ever known. I loved to hear her updates on Todd and Lisa who she loved and was so very proud of. I have many memories, all funny and good. I’m glad she is no longer in pain and is reunited with Dave.
I’ll see you when I get there Sue, and have even more fun. Love you!
Kelly (Jewett) Wojtysiak