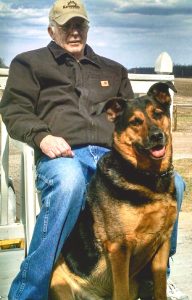 Steve was a veteran of the U.S. Army and served during Vietnam. He retired as a truck driver from the City of Lansing.

He is survived by his daughter, Stephanie (Seth) Koppelman; 3 grandchildren, Graham, Grace, and Addison Koppelman; stepfather, James Tostevin; half brothers, Kenny and Timmy Tostevin; sister, Deloris Matthews; and many nieces, nephews, and other extended family members. He was preceded in death by his parents, Harlow Austin and Ellenor Tostevin, and brothers Phillip “JJ” Austin and Earl Austin.

A graveside service will be held at 10:00 a.m. on Friday, August 20, 2021, at Maple Ridge Cemetery, Holt, MI. Memorial contributions may be made to Hospice House of Mid-Michigan. Arrangements are by the Estes-Leadley Holt/Delhi Chapel.

Steve was a wonderful guy, he was a second father to me. He will be missed by all that knew him. Rest easy my friend, till we meet again.

Sorry for your lose. I worked with Steve for many years at the city and remember him fondly. It was a pleasure to have known him.

You will be missed Steve..RIP