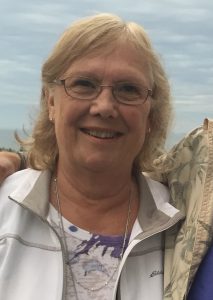 Sheila was born on December 11th, 1941 in Anderson, IN to Charles and Violet Buck.  She graduated from Anderson High School and attended Anderson University where she met Gary Corbin and the two were married in 1962.

After completing college with a degree in Education, in 1967 Gary and Sheila moved to Clio, MI where Gary served as Pastor of the Clio Community Church of God and Sheila taught pre-school.  After completing her teacher’s certification and eventually a Masters in Education from Michigan State University, Sheila began her career with the Clio Area School District first as a sixth grade teacher and eventually completed her career managing the school’s Title Nine reading program.  Sheila enjoyed teaching and the many friendships she developed with the other devoted teachers in the Clio schools.  She also impacted the lives of many students and school district staff helping them gain achievements in reading or pursuing higher education.

Sheila and Gary were avid Spartan (and Big Ten) football and basketball fans.  She was a voracious reader of non-fiction and as a proud Democrat kept abreast of all of the state and national political news.  Sheila was a life-long traveler beginning with the Buck family camping trips to northern Michigan and numerous trips around the country with Gary and their family and extensive travel to Europe and Asia. Sheila passed on her passion for travel to her grandsons, planning their annual summer trips to National Parks across the country.  After leaving Clio and Grand Blanc, Sheila and Gary moved to East Lansing to be closer to their daughters and grandsons and spent summers at their cottage in Petoskey eventually moving to Petoskey with winters in Maui, Hawaii.

Sheila is survived by daughters Susan Corbin and Sally Corbin (Ken Gunther), grandsons Lucas and Landon Lefler and Corbin Polec and their special friends Nic Burdekin, MacKenzie Chesley, and Elizabeth Kostrecki.  She was preceded in death by her husband of 57 years Gary Corbin, her parents and brother Robert.  According to her wishes, her daughters and grandsons will hold a private family ceremony and Sheila and Gary will now rest together.

We share your sorrow and our belief that she is with Gary where she belongs.

I always enjoyed my conversations with your mom. May she Rest In Peace.

I’m so sorry for your loss and am thinking of you and your family during this difficult time.

I am so sorry for your loss. Your Mom was my 6th grade teacher and I loved her. Always enjoyed spending time with your parents at your house when we were young. Thoughts and prayers to all of you.

Dear Sally and Susan. I have to say with a heavy heart I’m very sad. My prayers are with you and your family’s. Your mother was a very big part of my life. I had the best times baby sitting you both. I never made so much Carmel corn in my life. I had just found you on face book and was going to ask about Mom and Dad. My heart is just breaking for you all. When ever there is a election for senators I think of your Dad and the night watching your girls I’m so sorry I pray that God gives you and your family the peace that you need at this time. I’m love you both. God bless. Bonnie Lloyd.

Oh, Sally and all. So sorry to hear this news. Having difficulty typing this through teary eyes! They are together again…watching MSNBC, no doubt! Hugs to all of you!

Like others who knew Shelia and Gary, I am confident that they now rest in peace together. Anyone who met Shelia and Gary are experiencing a loss. Sending prayers for Shelia and the entire family.

Susan and Sally,
Lew and I are so sorry for your loss. We had many, many good times with your mom and dad. Saw you girls grow up and heard about your experiences as you became adults.
Was glad to talk with your mom after your dad’s funeral. Sorry we didn’t have more time together.
Stop by and see when you are in Petoskey.
God Bless you!
Lew and Karen Campbelll

Many wonderful memories of Sheila at Carter Middle School including those years we were carpool buddies. A strong, yet kind and wonderful woman who can now Rest In Peace with Gary. My sincere condolences to her family.

I am so very sorry for the loss of your Mother. My prayers thoughts are with you and your family during this difficult time.

Both your Father and Mother were an important part of my life. I feel like their passing leaves a huge hole. My prayers go out to both of you Susan and Sally, and may Gary and Sheila rest in peace and together.

I deepest sympathies go out to you and your family. It is so difficult to loose our parents. It appears that she had a wonderful and enriched life with all of you. My prayers are with you during this difficult time.

We are saddened to hear this news of your mother, just as we were saddened by the passing of your father. I also grew up in Anderson, and knew the Buck girls in church, high school and college, and later when she and Gary moved to Michigan. We treasure the memories of times we spent together discussing the issues of the day. Wonderful lady. She was so proud of her daughters, and then her grandkids.