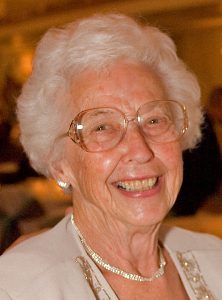 Saralu Mary (Knisely) Chamberlain, age 101, a vibrant and creative woman, passed away July 17th, 2021. Born in Channing, MI on October 26th, 1919, Saralu moved as a child with her parents and three siblings to Jackson, MI where she met her future husband, Gordon, while attending Jackson High School. It was not until several years later that they became an “item” as they sang together in the Calvary United Methodist Church choir directed by Gordon’s mother. They were married in 1945 after Gordon returned from his WWII duties and moved to Lansing in 1949 where they raised their four children.

Saralu was at her best when she was doing for others. She excelled as a homemaker, finding among other things, fun ways to entertain her children on rainy days and cooking intricate dinners every night. She was a Brownie and Girl Scout leader, a volunteer at Sparrow Hospital, the American Red Cross Telecare Program, Mobile Meals, the Gier Park School P.T.A., and the WKAR Radio Talking Book Program as well as participating in P.E.A., the Northside Action Center, and singing in church choirs for many years. She was never afraid to talk to anyone or lend them a helping hand and without fanfare advocated for people less fortunate than herself. She believed in equity for everyone and voted in last November’s election.

Saralu was predeceased by her parents Myrtle and Holton Knisely, her three siblings, her husband Gordon, her son Albert Chamberlain, daughter Carol Parker, and grandson Miles Chamberlain. She is survived by her daughters Cynthia Chamberlain (Thomas Marple) of Sequim, WA and Barbara Fuller (Jerry) of DeWitt, seven grandsons and seven great-grandchildren who all thought the world of her.

In lieu of flowers, Saralu’s family is asking that you consider making donations to Mayflower Congregational Church, Meals on Wheels, or WKAR Radio or Television.

A celebration of Saralu’s life will be held at Mayflower Congregational Church, 2901 W. Mt. Hope Ave., Lansing on Sunday, August 8th at 3:00 P.M. with visitation one hour prior to the service. Attendees are encouraged to wear bright colors because that is just how she would have wanted it. As a final act of selflessness, Saralu donated her body to the M.S.U. Willed Body Program. She was quite a woman!

One Message on “Saralu M. Chamberlain”

Saralu was such a wonderful woman and a lifelong friend of my mom. She and Gordon made a point of visiting my mom, Frances (Judge Horton) Nott in Jackson a couple of times a month after our father passed away. She always brought the meal, making enough to leave mom with yummy leftovers.. She occasionally called me to see if I might join them….lucky me! Saralu was so vibrant & outgoing.