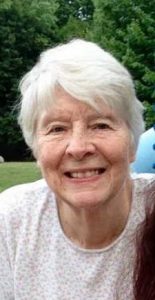 Sandra was a homemaker and an advocate with a servant’s heart. From her early years of farming and child raising with her husband Ron, to becoming the Director of A New Beginning Pregnancy Center in Charlotte, she always had a smile and a hug for those in need. For many years, Sandy’s strong love of the Lord drew her to regularly attending her church home, Pennway Church of God, in Lansing. She also enjoyed many kinds of games played with her family. She was also a snowbird to Florida earlier on.

A public visitation will be held from 12:00 – 1:45 p.m. on Friday, January 8, 2021, at Pennway Church of God, 1101 E. Cavanaugh Rd., Lansing. A private in-person funeral service will be held for the family, but friends are invited to view the service via livestream from Pennway.  The livestream will go out at 2:00 p.m. at:  pennway.online.church

Memorial donations may be made in her honor to Pregnancy Services of Eaton County, previously known as A New Beginning Pregnancy Center in Charlotte. Arrangements are by the Estes-Leadley Greater Lansing Chapel.

Sandy was a loving caring devoted Mother to her Family. She lived and cared for each of her children. She was loved by all. She will be sorely missed by all.

My condolences to Sandras family. I attended high school in DeWitt with her. We were on the basketball team together. She was very intelligent and always willing to answer questions concerning school work. I moved away and lost track of her and her family. My husband and I were God parents for their first child. May she RIP.

Sandy was a wonderful lady who inspired me with her determination, love for her family and God, and her hard work. It was a privilege to know both Sandy and Ron. May you all be comforted in this time of loss. Blessings on all of you.

My dearest sympathy to Sandy’s family. I learned so much from Sandy about hospitality, loving the Lord and your neighbor. She taught me canning and even tips on cooking. She always had a smile for each person. She will be missed. May God grant you comfort in your time of sorrow.

Sandy was a special friend to John and Florence McElheron, who knew her and Ron for many years. I looked up to Sandy as a strong woman who had a big and loving heart.
On behalf of all the McElheron’s, our sincere condolences on your great loss.
God bless Sandy and grant her swift entrance to eternal rest.
Susan McElheron Marrah

PS. If there is one word to describe Sandy it is: exuberant! She was a youthful
and lively spirit. I also remember distinctly her complexion: delightfully freckled from all the sun she was exposed to from her farming days! That is when we knew her, and of course from St. Thomas Aquinas Parish.
“Your wife will give you many children, like a vine that produces much fruit. Your children will bring you much good, like olive branches that produce many olives.” Psalm 128:3
God bless and keep Sandy! May the Mother of the Christ child envelop you and comfort you.
Susan McElheron Marrah