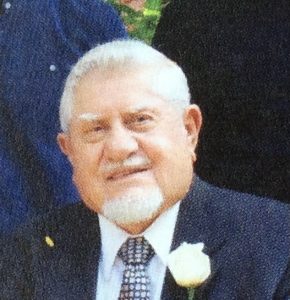 WWII veteran, was born January 27, 1927 in Midland, PA to Lazo & Martha Vosovic, the youngest of five children. He attended Midland schools, enjoyed sports, lettering in football, baseball and track.  Sava joined the Navy as a senior in high school. His mother accepted his diploma at graduation. He served two years during World War II on the USS Glennon. He was proud to serve his country as a Tin Can Sailor.

Back home after the war, a young girl caught his fancy. Sava and Dolores Milkovich were married September 25, 1949 and became parents to three sons, Michael, Samuel & Daniel. Sava was a police officer in Midland for 5 years. The family moved to Michigan, where he joined the Wayne County Sheriffs. As a young officer he taught himself magic tricks to keep school kids entertained during traffic safety lessons, and became affectionately known as Sam the Magic Man. He then worked for the Secretary of State until his retirement.

An avid hunter, Sam learned to hunt at 14 years old, hunting until his late 80’s. He enjoyed woodworking, crafting cradles, bird houses, toys, puzzles, even a rocking cow, all treasured by his family and friends. He was a Mason for many years with Masonic Lodge #33 in Lansing. When Sam & Dee both retired, they travelled the US, Canada and Europe. They enjoyed meeting people all over the world.

Sava was preceded in death by his son Samuel. He will be lovingly remembered by his wife, Dolores; his 2 sons, Michael (Mary) and Daniel (Sharon); grandchildren, Sara (Jim) Bristol, Daniel Vosovic & Kieran Mulcare, Nick (Jayme) Vosovic, Dana (Matthew) Clay; great-grandchildren, Ben & Mila Vosovic; ande many nieces, nephews and friends. Known as Jedo to so many, his spirit will live on in our hearts.

Funeral service will be Saturday, October 2, 2021 at 11:00 a.m. at Holy Trinity Greek Orthodox Church, 1701 East Saginaw St., Lansing, MI. Visitation will be prior to the service from 9:45 – 11:00 a.m.  In lieu of flowers, memorial donations can be made in Sava’s name to the Holy Trinity Greek Orthodox Church – Children’s Wing. Arrangements by the Estes-Leadley Greater Lansing Chapel.

Sam was one of the first managers I worked for at Sec of State. What a wonderful man I always enjoyed running into him thru the years he will be missed RIP Sam… Mary Akers

We will all miss Sam! So sorry for your loss.

My sympathies to you and your family. I always enjoyed our gun talks.
Vonnie