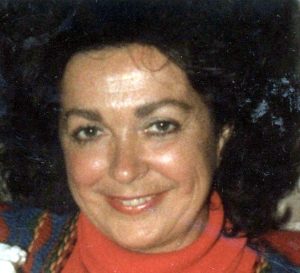 In 1938, Sally was crowned “Miss Lansing” at the age of 5, tap dancing a Shirley Temple number to win over adult contestants. At Sexton High School, Sally was the star cheerleader. She would have graduated in 1951, but she left school a few months prior to marry Don Randall on March 3, 1951, at the tender age of 17 before Don returned to bootcamp for the U.S. Army. Soon Don was sent to Europe; Sally stayed behind, working to earn enough money to join Don in Augsburg, Germany. The following year, Sally was able to travel across the Atlantic via the Queen Mary, landing in Europe on their first anniversary, March 3, 1952. While in Europe, Sally quickly became pregnant; yet, during their free time, Don and Sally toured a great deal of Europe in their Mercedes-Benz. Don and Sally returned to the States just before their first child was born. In addition to being gifted at sewing, knitting and crocheting, Sally would say that being a mother was her greatest accomplishment. Nothing gave her more joy than her children and grandchildren. In turn, her children would say she was the consummate mother. Sally had the most effervescent personality, a delightful laugh and a captivating smile. Even though she was “Elizabeth Taylor” beautiful, her true beauty was her heart and the love she shared with everyone. In her last few years, even though Alzheimer’s was robbing her of her mind and body, she would often giggle and, to the very end, she still smiled.

Sally was preceded in death by Don, the love of her life, in 2012, and their youngest child, Charles, who died in 1978, just shy of turning six.  Surviving are her children Nancy Vogl (David Strange) of Lansing, Maurice (Brenda), of Lansing, David (Carleen) of Olivet, Ann Hart (Shawn), Grant, FL, and Miriam Olsen (Jeff) of Lansing, as well as nine grandchildren and five great-grandsons.

A memorial to celebrate Sally’s life will be announced at a later date.

An honor to know her

I send my sorrow for the loss of your sweet mother to all you Randall “kids”. I have many fond memories of spending time with your family when I was young. Sally always made me feel welcome and I know my mom and dad cared very much for her.
All best,
Susan Boase

I agree Susan. Sally was a lovely woman.
> Rebecca Boase