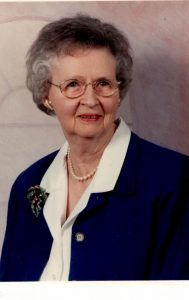 Ruth Lisette Ziegenmeyer Lewis died on January 12, 2021 in Lansing, Michigan.  She was born on March 27, 1921 in Clayton, Missouri to Herman F. J. Ziegenmeyer and Ethel Mary Jackson Ziegenmeyer.  Ruth was a graduate of Harris Teachers College in St. Louis, Missouri, and married Lt. Glen Walter Lewis at Delmar Baptist Church in St. Louis on September 4, 1943.  They lived in Detroit, Michigan from 1945 to 1975, when they moved to Lansing.  Glen predeceased her in 2008.

Ruth was a professional Certified Genealogical Record Searcher and also volunteered her services at the Library of Michigan until her retirement in 2012.

Ruth is survived by her brother Leonard George Ziegenmeyer and his family, and her daughters and their families.