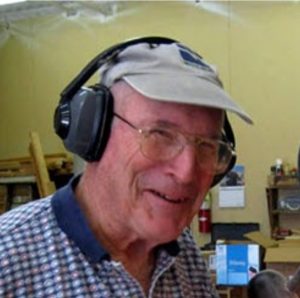 Ron graduated from Holt High School, Class of 1948. After high school, he worked for Michigan State University as a field tester. He was then hired at Oldsmobile as a Die Sinking apprentice.

He married the former Carroll “Rooney” Noxon in 1950, before entering the Korean conflict and then serving his duty in Alaska. Ron retired from Oldsmobile in 1987, having worked the bulk of his career at Plant 2 as a journeyman and later as a shop foreman. During this time, he made many long-lasting friendships and enjoyed the work that was offered.

Ron and Rooney were married for 50 years, ending with her death in 2001. During their marriage, they raised two children, John and Jane. After his wife’s passing, Ron lived and traveled extensively with the late Beverly Hause. Ron and Bev enjoyed live music, travel, playing cards and spending time with Bev’s and his grandchildren. They spent winters enjoying the beach and company in Orange Beach, AL.

Over the past two years, Ron shared a great majority of his time with his dear friend and companion Carol Haasch. Ron’s interests were numerous and varied. Most of his early interests were related to his passion for travel. He enjoyed flying, riding motorcycles, snowmobiling and RV camping. In the early 1960’s, Ron and his family made many cross-country flights to Florida and around the state of Michigan. R&R traveled out west, many times on his under-powered boxer twin. His overall philosophy was to enjoy the beautiful scenery and get better gas mileage. Camping and golf were activities he enjoyed with friends and family until the end. Inclusion of friends in these activities was always cherished. Ron’s interest in small game and deer hunting; a skill he used in his youth to acquire food for his parents and brother during the war, were passed onto his kids and grandson. Since the mid-60s, Ron was involved with the Holt Kiwanis Club and after retirement from the Olds, he volunteered at the R. J. Scheffel Memorial Toy Project.

Ron was loved and will be missed dearly.

Memorial contributions, in memory of Ronald, may be made to the R. J. Scheffel Memorial Toy Project or to the Greater Lansing Food Bank.

Our hearts cry with yours. Walt has known him since kindergarten and we always enjoyed him and his up beat outlook on life. Ron was a special friend. He will live on in our memories. God’s peace be with you.

We will miss Ron for the rest of our lives. He took outstanding care of my mother and was a great partner for her during the last 20 years of her life.
Our family will never forget our times together in Gulf Shores and here in Holt.
Our condolences go out to you Doug and Jane.
Shoot scratch in heaven Ron…..

He is an empty spot in our lives now.

We were very sorry to hear of Ron’s passing. We first met Ron in Orange Beach, where we became snowbird friends. Ron always enjoyed golf, although he would sometimes complain about his bad shots. We were amazed how well he played for a man in his 80’s and into his 90’s. He shared his knowledge of the game as well as a wide variety of other things. He had a lot of pride. We will miss him.
Bernie & Vicky Cluskey

I came to know Ron as part of the snowbird family in Orange Beach. Ron’s picture in this obituary captures his great smile, perfectly. It was my privilege to have known him for over 10 years, playing poker, traveling to the casinos in Biloxi, golfing, and attending the morning Coffee Club. Ron loved a good joke. I will always remember his deep laughter. He displayed a joy for life, commenting about our Texas Hold’em games, “Where else could you have this much fun for
$10. He will be missed by many.