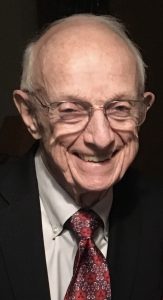 Ron completed his earthly service to his Lord and others and died peacefully on November 10, 2019. He rejoiced in his roles as husband, father, father-in-law, grandfather, son, uncle, and friend.

Born September 25, 1932, in Port Allegany, PA, to the late Harold and Leona Keagle Callen, Ron was raised in Cuyahoga Falls, OH. He attended Wooster and Wabash Colleges, and received an M.A. in Physics from Wesleyan University. He was married to Carolyn Mae Kamens on August 2, 1958, beginning a lifetime partnership of love and service together. They moved to Michigan in 1965, and Detroit’s Lafayette Park in 1967, before settling on Lansing’s West Side in 1973 where he and Carolyn immediately invested themselves in their new community.

A physicist, Ron worked for Pratt & Whitney’s CANEL laboratory on NASA’s nuclear powered satellite system, and for Detroit Edison on the operation and decommissioning of the Enrico Fermi Nuclear Generating Station. He retired from the Michigan Public Service Commission after nearly 30 years, where his responsibilities included representing the Commission at the National Association of Regulatory Utility Commissioners, and spent two years on loan to NARUC to design and direct their Nuclear Waste Assessment Office.

A member of Grace Evangelical Lutheran Church for over 45 years, he served the congregation in numerous roles, including as a council and choir member. He loved all forms of music and found endless joy and fascination in learning about all aspects of our world. He was devoted to Lansing’s West Side, where he and Carolyn organized numerous Garden and Home tours, and enjoyed years of friendships with the westside movie group. With good friends Dick Baker, Ed Eckart, and Luther Flanagan, he worked on numerous other community efforts, including anti-racism initiatives, the impact of the Logan Corridor project, neighborhood plantings, and environmental issues. He used his deep knowledge of the utility industry for eight years as a commissioner for Lansing’s Board of Water and Light, including a term as board chair.

In a life filled with love, faith, friends, family, and professional accomplishments, his forgiveness of his mother’s murderer stands out as a shining example of a life of grace, mercy, and reconciliation, even with those who bring you great harm.

Together, he and Carolyn had a gift for making, keeping, and caring for friends, creating a countless number of lasting relationships. He will be dearly missed.

The family wishes to thank the staff of Sparrow Hospice House for their professional, gracious, and compassionate care for Dad, and us, at the end of his life.

The funeral service will be held at 11:00 a.m. Thursday, November 14, 2019, at Grace Evangelical Lutheran Church, 528 N. Martin Luther King Jr. Blvd., Lansing, MI 48915, with Pastor John Schleicher officiating. Interment will follow in Evergreen Cemetery, Lansing. His family will receive friends 3:30-6:30 p.m. Wednesday at the Estes-Leadley Greater Lansing Chapel, and also one hour prior to the service at the church on Thursday. In lieu of flowers memorial contributions may be made to Grace Evangelical Lutheran Church.

We will miss Ron, a gracious and faithful friend for many years. We enjoyed sharing our mutual grandchildren, Abby, Elizabeth, and Emily. Lansing is a better community because of the many ways Ron and Carolyn served it. Rest In Peace dear friends. Paul and Linda Thompson

Uncle Ron was a true gentleman, rock steady and a salt-of-the-Earth person. Always treated others with caring and dignity. I’ll remember him as a kind and loving man who made everyone in his presence feel special.

We will be with you all in spirit on Thursday and forever. An incredible man surrounded by equally wonderful family members. May you all bask in the memories you’ve made together. Thank you for allowing us to be part of the family. Love, Barb & Fran Davis

I’m so sorry for this very sad loss. Your dad seemed like a truly remarkable man. May his love live on insdie you.

We never had the opportunity to meet Mr Callen but just knowing Phil, his son, we know that Mr Callen must have been an extraordinary individual.

There’s lots to love with Mr. Callen, his wonderful wife and family, and I send heartfelt condolences to all. Really appreciate this sharing of his life story here as it’s easy to see the many threads that intertwine our families, all starting in 1967 in Lafayette Park. As dear friends of my Mom, Mr. and Ms. Callen stepped up time after time to support me and my family through the deepest of troubles and highest of joys. What a realm of substance and grace to ponder amidst our often distracted lives! Mr. Callen is such a role model, clearly influencing and brightening my life, and I’m deeply grateful.
With Love,
Edric Guise