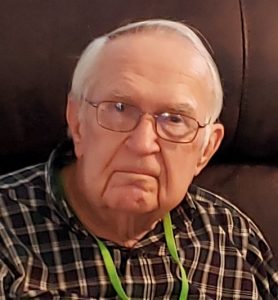 Robert “Bob” was a graduate of Sexton High School and MSU. He earned a degree in mechanical engineering in 1956. He also participated in ROTC while at MSU. He went on to work for Oldsmobile in Lansing until his retirement in 1986. He worked several more years at Simplified Tax and Accounting Services doing taxes from January to April each year.

His happiest times were spent at his Houghton Lake cottage with family and friends. Always at his side was his wife of 65 years, Joanne.

He was born in Paragould, AR, on January 8, 1933, to Calvin W. and Ruby E. (Baldwin) Ladd. His family moved to Michigan when he was 3 years old with the family dog riding on the running board. He lived in Lansing and Holt the rest of his life.

Bob was preceded in death by his parents; sons, Steven and James; and his wife, Joanne (Field). He leaves his daughter, Teresa “Terri”; grandchildren, Melanie (Ken) Childs and Alexander Spicer; 6 great-grandsons; and his little dog, Ollie.

A graveside service will be held at 2:00 p.m. on Monday, June 8, 2020, at Maple Ridge Cemetery, Holt, where Bob will be laid to rest. A celebration of Bob’s life will be held at Houghton Lake later this summer.

Bob’s family asks that in lieu of flowers, donations to the Alzheimer’s Association would be much appreciated. Arrangements are by the Estes-Leadley Holt/Delhi Chapel.

Terri: I worked at Brookdale for a short time, and it was an absolute pleasure working with your dad. What a kind and loving man he was, and always had a kind word to anyone. I really enjoyed the times I spent with him. You were very blessed to have him as a father. My thoughts are with you.
“Death is that state in which one lives in the memory of others. That is why there are no good byes, just good memories”. We were all blessed having known Bob.

Janet: I’m Darlene Nollen daughter. My mother had a wonderful friendship with your
father at Brookdale. I visited both of them at Brookdale. Your father was always such a nice person to spend time talking with. He was a very good friend to my mother. Helping make
her days brighter by being there with her. We will miss him dearly.

Terri, I am the daughter of Regina Krupiarz who was at Brookdale when your Dad was there. My husband, Greg, and I enjoyed seeing your Dad and chatting with him. My Mom passed away April 29. It is very hard losing a parent. We have good memories of Bob.Peace to you and your family. Jane Krupiarz Earl
.