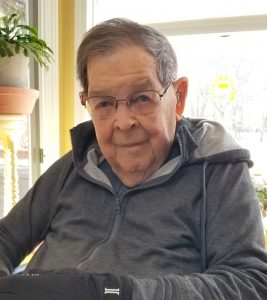 Bob was born December 7, 1923, in Detroit, Michigan, and worked as an Electrical Engineer to promote public transportation safety throughout his career. He retired from  the Michigan Aeronautics Commission in 1991.

Always led in faith, he was a devout and prayerful Catholic, whose service included being the past President of the St. Thomas Aquinas school board. He also enjoyed teaching mathematics in technical vocations at  Lansing Community College.

At any gathering, Bob could be found in the center of the crowd, singing, laughing or telling  jokes. His love of music and singing began in the church and led him to his wife, Joan, and  soon passed their love of music onto their children and grandchildren. Also an avid pilot, in his free time, he could be found above the clouds, doing “touch and go’s” or taking his family on trips. Flying led to another passion loved and enjoyed with his son and grandson.

Above all, his care and concern for others was  central to any encounter with family and friends, new and old.

Memorial contributions may be sent to the Capuchin Soup Kitchen in Detroit https://www.cskdetroit.org/more-than-about-food/ or to the St. Thomas Aquinas school fund https://www.elcatholics.org/complete-list.

A livestream will be available here : http://facebook,com/elcatholics

Saddened to hear of your Fathers passing. He was a very special person. Hard to find a more dedicated man to his family, I was always amazed how he raised all of you by himself after your Mom’s passing. I think it defines commitment and devotion to each of you and to your Mom.

Please find comfort in all the memories you have of him.

Another great man has been accepted into the heavens. Uncle Bob will continue to guide us in our thoughts and prayers. We hold on to the loving memories we have on this day and forever.
Missing you.

One of the nicest, funniest residents we have ever had. Such a gentle soul. Bob will be greatly missed by all the staff at Suncrest.

It was an honor to care for him this past year. Robert made us laugh so much and made me a better care giver. He prayed before every meal and had a genuine concern for others. I only wish I had known him longer than 1 year. He will be missed.

My deepest sympathy to all in his family. He was a wonderful man and genuine light to the world that will be missed.

My Uncle Bob was a man of many talents and a devoted family man. He was also a wonderful brother to his siblings. He and my mother Honorah had a special relationship. They were more than just siblings, there friendship was deep and a blessing to both of them.

On behalf of the Capuchin brothers I offer my deepest sympathies on the passing of Bob. It is truly humbling to receive memorial donations in honor of Bob’s life. Please be assured of the brother’s prayers for the entire Addy family during this great time of grief. May perpetual light shine upon Bob.

Grace is experienced in many ways, and Bob Addy was a personification of Grace. He was kind, sincere, quick to smile and to laugh loudly, serious about things that matter, and a wonderful example to all of a Christian man in the modern world – what a privilege to have known him! Rest In Peace, Bob.

Thank you Family for posting in the Free Press the death of my cousin – Bob Addy. He was a loved man who was treasured by many. Bob was always available to take my brother (Mickey) who was handicapped out for the day. .My mother was Grace McDonald. God bless his precious soul – he is together with Joan after so many years…

As a resident of Beacon Woods in Bayonet Point. FL from 1985 until 2005 when we returned tp Chesterfield, MT, My wife Pat and I have memories of conversations with Bob, socially and on the golf course.

We made several returns to Beacon Woods over the next ten years and I fondly recall on our last visit that when Bob and I played golf together and enjoyed a drink together when we finished.

Bob was a true gentleman and it was a blessing to know him. .

Our deepest sympathies, our prayers are with you.
Love the Foley’s (Tom, Shelley, Sara, Ryan & Megan)

My thoughts are with you all. I have so many nice memories of living on Bedford Road with the Addy family as much wonderful neighbors. Your Dad was such a nice, thoughtful man. Sending love, Sue Safir

Our thoughts and prayers are with all of you. Such a void in your lives again. The memories we have are such a treasury to last a lifetime. Your Dad taking Tom on many plane trips-just our visits with him were such a pleasure.Of course your Mom and my hundreds of time together plus almost daily phone calls will live in my heart forever.Now God has reunited them once again. That alone gives us peace and joy, have 2 more Saints to pray to. What a beautiful family Bob and Joan are leaving us.
Sorry we are unable to attend the services and spend time with you.
LOVE YOU ALL. Tom and Barb Cleary