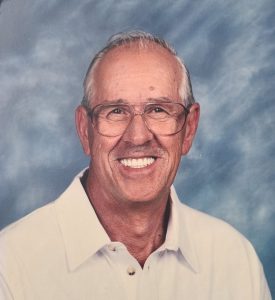 Age 89, passed away July 22, 2021, formerly of Holt.  He was born July 13, 1932, in Lansing, Michigan, to Herman and Mary Ott.  Dick was in the U.S. Army, 82nd Airborne and the 11th Airborne divisions.  He served on the Holt Fire Department and coached Little League baseball and basketball for twelve years.  Dick retired from General Motors in 1985 after working there for 37 years and 8 months.

Surviving are his wife of fifteen years, Marjorie; his children, Richard (Annette) Ott, Jr., Chuck Ott, Bob (Jill) Ott, Mary Schindewolf; stepchildren, Scott (Lynn) Comer, Lisa Chesney, and Chip McClure.  He also leaves behind many grandchildren and great-grandchildren.  He was preceded in death by his parents; his wife, Sylvia; brothers, Herman Ott and Donald Ott; a grandson, Justin; and a stepson, Mark Losey.

His family will receive friends at the Estes-Leadley Holt/Delhi Chapel, on Thursday, July 29, from 2pm-5pm. The family asks that contributions in Dick’s honor may be made to a charity of one’s own choosing.

Our deepest sympathy to marg and familys.He was a good friend. He will be sadly miss.Our prayers to you all.

We have many great memories of Dick though out our lifetimes and hoping he is at peace. Love ya all!

My deepest condolences to Marjorie and the Ott family. He will be missed..

We are so sorry to hear about your father’s passing. May God give you peace and strength during these difficult days.

Sorry for your loss. Prayers to the ott family. Dick was a good father in law. Will miss him.

My deepest sympathy to the Ott family. I know Dick and my dad have linked up on the celestial DZ. AATW
Til Valhalla.

I had the opportunity of being involved on the fire department with Dick for many years, and can’t say enough about how much of an impact he had on the department with his involvement. It was always a pleasure to work with Dick and he was more than likely to bring a smile to your face with his great sense of humor. Deepest sympathy, along with thoughts and prayers to the Ott family.

I will miss my uncle…he was an amazing man and we have so many great family times to remeber…love and hugs to the entire family.

I will miss our music jams and especially the friendship