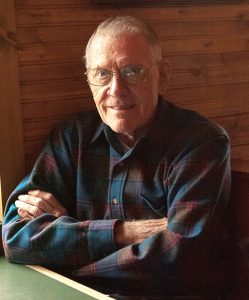 Dick was raised in Franklin, Pennsylvania, and graduated from Franklin High School in 1950. He attended West Virginia Wesleyan and Penn State prior to two years in the Army, primarily stationed in Utah. When he was discharged from the Army, he completed his college education, graduating with a degree in Chemical Engineering, from Tri State University (now known as Trine University) in Angola, Indiana. While at Tri State he met the love of his life, Patricia Druckamiller, who passed away in May 2014.  Pat and Dick were married on June 14, 1958, and moved to Lansing where Dick had obtained a position as Chemical Engineer with Oldsmobile. They moved to Holt in 1960. Dick retired from Oldsmobile in 1988.  Pat and Dick loved to play bridge and travel; they traveled every chance they could. He enjoyed collecting and tinkering with antique clocks, was involved with the Boy Scouts for many years, and enjoyed outdoor activities, especially hunting and ice fishing. He was a longtime member of the First Presbyterian Church of Holt.

He is survived his children, Lori (Jerry) O’Hare of Colorado Springs, Colorado, Curtis (Laurie) Parker of Holt, MI, Timothy Parker and his son Brennan Parker of Laingsburg, MI; niece, Carol (Tim Mickle) McConnell of East Lansing, MI, nephews, David McConnell of Mason, MI, Daniel (Renae) McConnell of Chesapeake, VA, and James (Margaret) McConnell of Mulliken, MI, all who were raised by Pat and Dick; brother, Tom Parker of Carlisle, PA; and sister, Melissa Brown of Miamisburg, Ohio.  Dick is also survived by other family members as well as many close friends. In addition to Dick’s wife and parents, he was preceded in death by sister, Marcia McConnell; daughter-in-law, Lisa Parker; and niece-in-law, Ann McConnell.

A funeral service will be held at 11:00 a.m. on Friday, September 13, 2019, at the First Presbyterian Church of Holt, 2021 N. Aurelius Rd. A private family graveside service will take place in Maple Ridge Cemetery in Holt following the church service. The family will receive friends an hour prior to the service at the church. Memorial contributions may be made to the First Presbyterian Church of Holt or the Alzheimer’s Association. Arrangements are by the Estes-Leadley Holt/Delhi Chapel.

Dick’s family wishes to thank the staff of Sensations Memory Care, Charlotte, MI, for their care over the past two years and to McLaren Hospice.

I’m sorry for your loss. Condolences to the family. May Good bless you and grant you peace through this difficult time.

Thinking of you! So sorry for your loss. Pam wilson

May Our Strong Loving Savior bring you all Peace and assurance during this time of releasing your Dad into the arms of Jesus. Prayers for you all.

I’m so sorry for your loss. He was a great man to take in all of your cousins Tim. I remember him doing a lot with the Boy Scouts. He made it to 87 like my dad, they were both old school. Work your ass off for your kids. I will keep you in my prayers.