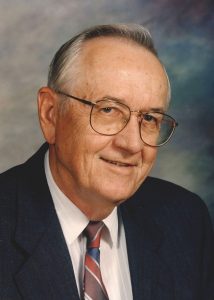 He was born to Henry C. and Louise Staub Johnson in Newberry, Michigan, on April 11, 1925.  As the youngest child of six children, Richard was an avid reader, enjoyed playing cards and had a passion for fishing.   Richard was a WWII Veteran of the Navy having served from 1943 – 1946.

He was a graduate of MSU, and taught business at Everett High School, in Lansing, until retirement in 1987.  Richard was a lifelong, active member of Christ Community Church, in Lansing, where he served in many roles and was devoted to his faith.

A memorial service will be held at the Estes-Leadley Greater Lansing Chapel on Saturday, May 16th, at 11:30 am. The family will welcome guests for a memorial visitation, one hour prior to the service.  In lieu of flowers, memorial contributions may be made to Hospice of Lansing in memory of Richard C. Johnson.

I am so sorry for your loss. Dick was a gentleman whom I enjoyed attending church with for over 40 years. May God hold you in His loving arms as you mourn this loss. You are in our prayers.

Our prayers go out to Christine, Leslie, Jolene, David and their families. We attended church with the family for over 50 years, Dick was godly man, and a great teacher. It is hard to lose someone you love, now to reunite with his loved ones at the feet of Jesus.
Stephanie Underhill-Robinson

Mr. Johnson was one of my favorite teachers while I attended Everett High School. My sincerest condolences to his family and friends.