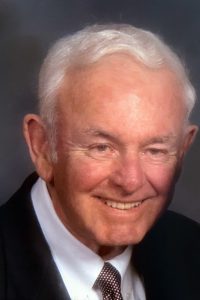 Rex was born on August 22, 1924, in Lansing, Michigan, to John Harold and Madeline (Bayshore) Sessions. He graduated from Lansing Central High School in 1942. He attended Occidental College and graduated from the University of California, Los Angeles, in 1946 where he was a member of the Delta Kappa Epsilon fraternity. He enlisted in the U.S. Navy during WWII as part of the Signal Corps. On April 29, 1950, he married Elizabeth Lisle Sessions. After living in Rutland, Vermont, from 1953-55, Rex and Betsy returned to Lansing where they lived together until Betsy’s passing in 2012. Rex worked as an executive at Oldsmobile throughout his career until his retirement in 1984. While at Oldsmobile, he was honored with several awards for excellence.

Rex and his family were long time members of the Plymouth Congregational Church where he was extremely active in the choir and church management. He served as president of the Lansing Country Club in 1982/83. Rex was an avid golfer, gardener, and cardplayer, and loved to travel. He visited all 50 U.S. states, six of seven continents, and took a trip around the world for 70 days at age 88. In 2019, at the age of 95, he traveled to Washington DC as part of the Talons Out Honors Flight.

A memorial service will be held at 11:00 a.m. Saturday, March 25, 2023, at Mayflower Congregational Church, 2901 W. Mt. Hope Ave., Lansing. In lieu of flowers, gifts can be directed to support the Talons Out Honor Flight for U.S. veterans.  Online condolences may be left for his family at www.EstesLeadley.com.

One Message on “Rex E. Sessions”

Rex was an elegant gentleman.He was a great story teller fun and good friend. He will be missed very much.