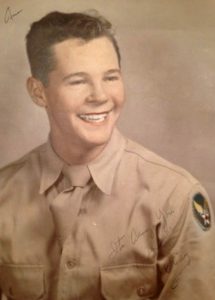 Raymond, 95 years old, of Holt, MI, went home to his Lord and Savior Jesus Christ on Friday, January 7, 2022.  Ray was born October 6, 1926 in Brooklyn, New York, the son of Edward and Helen (Donahue) Doyle.  He attended Brooklyn Technical High School and upon graduation promptly and proudly joined the Army Air Force during World War 2.  He was enrolled in the Cadet Flying Program – a passion which continued throughout his life.  He was proud to have served his country and never failed to acknowledge and encourage his fellow veterans whenever he encountered them.

Ray held various positions in industrial sales and retired from Granger Waste Services.  Ray enjoyed reading, keeping up with his friends and family on Facebook, golf, cross country skiing, and swimming.  In November he finished writing his first short story entitled “Out of the Night.” He and Merle also served as volunteer counselors through their church for many years.  Ray loved dogs and cats and was a longtime supporter of Ingham County Animal Shelter.  Ray loved Jesus and was a passionate witness who shared his faith and prayed with people every chance he got.  He especially loved to pray for babies and their parents.

He was preceded in death by his beloved wife of 37 years, Merle; his parents; his brother and sister-in-law, Edward and Anita Doyle; first wife, AnnaRose McArdle; daughter-in-law, Lydia Burtraw; and son-in-law, Kevin Smith.

The funeral service will be held at 11:00 a.m. on Friday, January 14, 2022, at Pennway Church of God, 1101 E. Cavanaugh in Lansing.  Interment will follow at Deepdale Memorial Gardens. The family will receive friends at the Estes-Leadley Holt/Delhi Chapel on Thursday, January 13th, from 6-8 p.m. and again on Friday at the Church for one hour prior to the funeral. Memorial contributions may be made to the Ingham County Animal Shelter or Life Challenge of Michigan.

“He gives power to the weak and strength to the powerless.  Even youths will become weak and tired and your men will fall in exhaustion.  But those who trust in the Lord will renew their strength.  They will soar high on wings like eagles.  They will not grow weary.  They will walk and not faint.”  Isaiah 40:29-31

Pops you have been my best friend, my encourager, my spiritual mentor and the best father a girl could ask for. We treasure all the wonderful years God gave you to us. I will miss your quick wit, your sparkling and the incredible way you loved all people. You have reached your eternal destiny and I know Jesus welcomed you with “well done my good and faithful servant”. See you at the gate.

Thank you for your friendship over the years

Ray, you will be missed, always interesting and insightful, it was an honor to call you friend. Mike

Ray and Merle will both be missed. I just loved them and their ability to have so much fun, yet go deep and serious in a second. They were great sources of wisdom and love, and I will truly miss that from both of them!

God bless you all in the Ray Doyle family!

Dad always made it clear to me and to everyone who would listen that I am his son. None of this “son-in-law” nonsense. I am grateful for and will treasure the memories I have of him in my heart.

Although Dad was diminutive in stature, his personality was larger than life. The impish twinkle in his eyes as the corny jokes and pithy aphorisms rolled effortlessly and endlessly off his tongue always made me laugh with delight. His passionate condemnation of all that is evil in this world was only exceeded by his compassion and love for others. He was one of God’s mightiest prayer warriors– an enviable trait he passed along to my beloved wife Susan. Dad’s love for Merle was truly a sight to behold. It was always obvious to me that they were head over heels in love with each other.

Dad was extremely well read, articulate, and profoundly intelligent. He and I could carry on a conversation on just about any topic.

Although I will miss Dad as I carry on in my life, I will do so knowing that my memories of him will always bring me comfort and joy. These memories will slowly, but surely, fill the hole in my heart created by his joyous return to our blessed Savior, Jesus Christ.

I adore you Dad. So long for now…

[As Dad might say with a Leprechaun’s grin: “There are only two kinds of people in the world, the Irish and those who wish they were.”]

None of you know me, but I was in the waiting room with Ray in December at the hospital. I’m sorry for your loss.