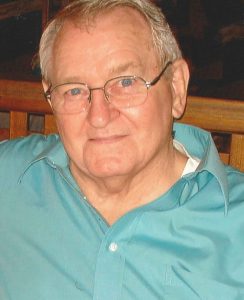 Ralph proudly served in the U.S. Air Force for 8 years. He was a former vice president of UAW Local #602 and retired from Fisher Body (General Motors). He was a longtime member of Cedar Street Church and the Buck Reasoner Post #238 American Legion in Holt. He was an avid auto racing fan and Holt High School sports enthusiast. Ralph was known to the Holt wrestling family as “Grampa Coop.”

The funeral service will be held at 11:00 a.m. on Friday, October 15, 2021, at Cedar Street Church, 1705 Cedar Street, Holt. Interment will follow in Chapel Hill Memorial Gardens, Lansing. His family will receive relatives and friends beginning at 10:00 a.m. on Friday at the church. In lieu of flowers, memorial contributions may be made to the Holt Food Bank. Arrangements are by the Estes-Leadley Holt/Delhi Chapel.

Wanda and family, so sorry to hear about Ralph, he was a good man and good to his family. Will always remember the good times we had at the NASCAR races. My prayers are with you Wanda and family in this hard time.

So sorry for your loss. I will be out of town Friday but my thoughts and prayers will be with you and your family.

I always loved seeing Grandpa Cooper at meets and tournaments. He was loved by so many. I am so sorry for your loss.

Wanda & family- I’m so so very sorry for your loss. Ralph was a good man. I got re-acquainted with Ralph when I joined CSC in 2006 and got the pleasure of meeting you Wanda! Always loved seeing you both at the church house with Robin, Joe & those grands! Working at GM I heard of Ralph Morrison. Didn’t know him really well but knew he was a class act. Heard only good things. A kind person with a kind smile. God Bless you all!

Wanda,
We are so very sorry for your loss. Ralph was a wonderful man who was loved and respected by so many in our community. We will be forever grateful for his friendship and the support he showed our boys while they were growing up. He leaves a giant hole in the hearts of many. We won’t be able to attend today but we are thinking of you and holding you close in prayer.

Wanda,
I am so sorry for your loss. Ralph was so special to Larry and I, we loved him very much. He was a true icon at the wrestling tournaments. His passing makes me so sad. My apologies for not being able to attend the service. My boys and I are thinking of you and your family and sending our love.