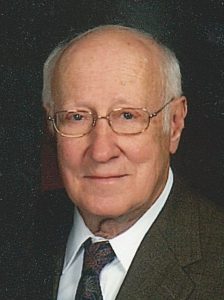 Don graduated from Jackson Business School, then enlisting in the army being stationed in Heidelberg, Germany. Upon returning he entered Michigan State College, receiving his B.A. degree. Don was employed with Farm Bureau Insurance, Michigan Millers Insurance, and then he went to work for General Motors in 1963, retiring in October 1993.

In 1957, Don married Helen (Dillon). Together they had three sons, Christopher, Seth and Steven.

Don was a Boy Scout leader for several years and held several offices with the Holt United Methodist Church.

Don leaves his wife, Helen; children, Seth (Sara), Steven (Karen); 5 grandchildren; as well as 3 great-granddaughters.  He was preceded in death by his son, Christopher, and sister Joyce Shafor.

Don was an awesome man, with a heart of gold. I will truly miss him, he made an imprint on my life in the time I knew him. God has given us another angel one who will never be forgotten.

Thank you Kia, He enjoyed your company as well, You gave him good care, and a friend as well.

Don was a great man. He always made me laugh and I left every visit with him with a smile on my face. I will miss him as I’m sure will so many others.

Thank You for your kind words, He will miss seeing you as well as Kyi.

I WORKED WITH DON AT OLDSMOBILE MANY YEARS AGO — WILL NEVER FORGET THE SNOWED-IN WEEKEND WE SPENT IN 1967 (?) IN DEWITT. MAY HE REST IN PEACE AND LIGHT. A WONDERFUL AND GENTLE MAN!!

I do remember hearing Don speak of you, Yes, I so, well remember that night, I was here with 3 Boys. He got home the next day mid afternoon.

Don was the consummate gentleman, a kind loving soul with many talents. He will be remembered by many for the life example he set.

Don was the reason I loved going to work. He always had something cheery to say and reminded us to keep smiling. He truly was “a ray of sunshine”. Don, you were one of a kind and I can’t thank you enough for the beautiful memories. Rest In Peace, Don

Thank you for all the care that you gave to Don.

I loved him very much, sweetest soul. Such a character and never had a dull moment. I’m going to miss him so much. He has a spot in my heart.

You did a very good job of caring for Don, Thank You!

Thank you very much for your kind words. You helped take very good care of him.

Thank you for helping keep Don very comfortable, it is nice he even gave you a new name, and a rather nice one at that!

Helen,
Gary and I are so sorry to hear of Don’s passing. Even though we have been in NC now for almost 12 years, we have often thought of you and Don from our years in Holt and Holt UMC. Our thoughts and prayers are with you and the family now and in the days ahead.

Thank you many think of many people, thank you for your note!

Thank you for your kind message, we did speak of you in the last few years. It is nice for you to send a message.

We aren’t supposed to have favorites, but you made it impossible to not have you as a favorite. You made me smile every day. I loved caring for you and am blessed to have known you. You will be deeply missed.

Thank you for your words of kindness as well as you help in keeping Don comfortable during hi time in your care.

We aren’t supposed to have favorites but you made that impossible. You made me smile every day. I loved caring for you and am blessed to have known you. You will be deeply missed Don.

I loved him so much. He always found a way to make my day better. I loved caring for him. I’m never going to forget the times we had together. So blessed to have known you. Rest easy.

I’m going to miss don so much. He has a big spot in my heart. A loving soul and great character. Always gave me a smile .

Thank you for all the care you gave Don, He enjoyed you, he even gave you a new name.

Don you were everyday my sunshine, I always called you sunshine and you gave me that beautiful smile. I am so blessed to have spent time with you, absolutely enjoyed your sense of humor. You will be deeply missed. Forever a place in my heart.

You were most kind to Don, giving extra attention which he enjoyed I’m sure. You give all a great amount of attention, you give your ALL! I will come to visit sometime in the near future.

Don, you made me smile every day I would go to work. I loved getting to know such a kindhearted funny person. If i had a bad day, i knew i could go to work and see your smile and i would cheer up. I miss you so much. I know we’re not supposed to have favorites but it’s hard when you have a sweet soul like you.

Thank you for all of your kindness, He was a very kind man.

No words can describe how much Don meant to me, and how much I will miss him. Taking care of him gave me the greatest joy, and I will never forget him.

Helen,
So sorry to hear of Don’s passing may he rest in peace

Thank You Karol. He will be missed!

Our sympathy to your family. May Don Rest In Peace.