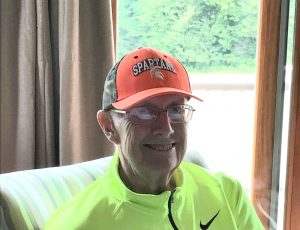 Age 77, passed away October 11, 2019.  He was born February 15, 1942, in Lansing, to Ralph and Mary Gunthorpe.  Lynn graduated from Eastern High School.  He started Gunthorpe Plumbing and Heating in 1980, and was a member of Local 333.  In 2003, he retired and moved to Houghton Lake.  Lynn was a member of Zion Evangelical Lutheran Church and Shepherd of the Lake Lutheran Church.  He enjoyed golfing, spending time with his grandchildren, playing video games, fishing in Canada with the guys, and going to the casino.

The funeral service will be held at 11:00 a.m. Tuesday, October 15, 2019, at Zion Evangelical Lutheran Church, 4001 S.  Pennsylvania Ave., Lansing.  His family will receive friends at the Estes-Leadley Greater Lansing Chapel from 5:00 – 7:00 p.m. Monday, and one hour prior to the funeral service at the church on Tuesday.  In lieu of flowers, memorial contributions may be made to the Alzheimer’s Association in memory of R. Lynn Gunthorpe.

Our thoughts and prayers are with you all. Sending love from the Hoosier state.

Wednesday was just another day at the casino and after talking with Jess. I have thought about and prayed for your family daily. My daughter Jill just shared this with me. I know he has found peace with the Lord. It is hard to say good bye twice when it comes to that disease.