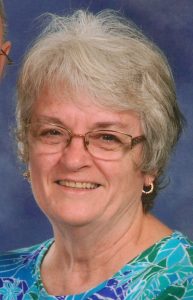 Age 77, passed away July 31, 2021.  She was born July 14, 1944, in Lansing, to Herman and Bernadine Fuller, who have preceded her in death.  Phyllis graduated from Lansing Eastern High School in 1962, and married Roger Zuke.  She enjoyed sewing, being outdoors, camping and especially spending time with her grandchildren and great-grandchildren.

A graveside service will be held at 12:00 p.m. Wednesday, August 4, 2021, at Evergreen Cemetery in Lansing.  Memorial contributions may be made to the American Cancer Society in memory of Phyllis Zuke.

Your earth bound journey is behind you, my dear cousin. No more pain. You will be remembered fondly, your bright spirit and laugh. Nice memories of our younger years. I will miss our phone conversations. Blessings to all your family.

Thankful for the time I had to know you and Papa Zuke.
You are going to be missed greatly by your family and all who knew you. Thank you for teaching me things that I will never forget.
You are at peace with Jesus Now, may He give your family peace.