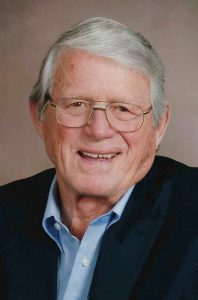 Pete moved to Jackson, MI in 1942, where he attended St. Mary’s Catholic School.  His family was transferred to Royal Oak, MI in 1948.  Pete stayed in Jackson to finish the football season, then joined his family in Royal Oak and graduated from Shrine of the Little Flower High School in June of 1949.

After graduation from high school Pete went to work for Chevrolet Gear and Axle and attended Jackson Community College, where he studied Production Management.  He was drafted into the United States Army in 1952, where he served two years in Okinawa during the Korean War.  In 1954 he was honorably discharged from the Army and went to work for Italian Mosaic.

Pete married the love of his life, Katharine M. “Kitty” MacDougall, on April 12, 1958 and they celebrated 57 years of marriage before she passed away in August, 2015.  He and Kitty had 5 children, 15 grandchildren and 2 great-grandchildren.

Pete and Kitty lived for a brief time in Watertown, NY, when they were first married, when he worked for the New York Central Railroad.  When the NYCRR was discontinued in Watertown, he and his family moved to Spartan Village in East Lansing, where Pete finished his education at Michigan State University in 1960, with a degree in Business, Production Management.

Pete started working for General Motors in 1960, Oldsmobile Division, at the Forge Plant on Saginaw Street. He worked his entire career at GM and he retired as a Superintendent, in 1992.

Pete and Kitty raised their 5 children on the west side of town, in two different houses in the River Ridge neighborhood, from 1961 to 1984.  In 1984 they bought a 100-year-old farmhouse in Laingsburg and totally renovated it together, a dream that they had for many years.

Pete enjoyed bowling and golfing and was in many leagues over the years.  He also enjoyed fishing and every summer for many years, went to Canada with different friends, family and his sons, to fish for Walleye.  Pete also was a big sports fan and enjoyed watching his children participate in sports at Waverly High School, Lansing Catholic Central and Lansing Community College.

Pete was known for his love for Michigan State University sports.  For years he held season tickets to MSU football games and when it got too hard for him to attend the games in person, he enjoyed watching football and basketball games from his favorite recliner.  His favorite saying was “Go Green” and he had a closet full of MSU green t-shirts, polos, sweatshirts and jackets.  He was also known for being the life of the party and for his LOUD voice, but his bark was always worse than his bite.  He was a very loving man who adored his family.

Pete was preceded in death by his parents, his wife, Kitty, his granddaughter, Katelyn Elizabeth Mattice, his brother Bill and wife Ann, his brother Paul and wife Dolly, his sister Anne and his sister-in-law Jan.  He is survived by 5 children, Carroll (Kale) Gallatin, Peter Jr. (Cindy), Michael, Katie (Michael) Mattice and Betsy (Jason) Marko; 14 grandchildren, Kate (Tye) Bankhead and Thomas (Emily) Gallatin, Jackson, Evan and Maddie Shearer, Victoria (Jake) Bonotto, Kristi, Zachary and Heather Shearer, Kara, Lizzie and Jack Mattice, Ellie and Ty Marko, and 2 great-grandsons, Landen Bonotto and Rowan Shearer.  He is also survived by his brother, Tim and and many nieces and nephews.

Pete’s family would like to thank his nurse Heather and his aide Amber and all of the staff from The Care Team Hospice. We would also like to thank all the friends, neighbors and family that supported Dad with their kindness and generosity.

In lieu of flowers, donations may be sent to The Care Team Hospice, 5401 Gateway Center, Suite D, Flint, MI 48507. Please put Peter Shearer in the notation line of the check.

A mass and graveside service will be held privately. Arrangements are by the Estes-Leadley Greater Lansing Chapel.

Many thoughts and prayers are with all of you. Every time we had the privilege of seeing Mr. Pete and Mrs. Kitty when they visited kids and grandkids in Texas, we enjoyed talking with them and felt as if we had know them forever! Truly wonderful people—I know you will miss him as you miss her.

We have always admired Carroll’s family and the proud work ethic her Dad, Pete, taught them. We are praying your memories will bring you peace and comfort. Love to all.

Pete liked to tease with a sparkle in his eyes and a smile that would draw us in. He had a fun way to ask why folks from the top of left-hand hill in West Virginia were in East Lansing Michigan. A loyal Spartan all the way. But, we noticed that his children and Kitty always came first. Condolences on your loss. May all those moments of celebration ring loud in your hearts. We believe that his Savior, Jesus Christ, has taken his hand and is walking him to the throne of God our Father through the power of the Holy Spirit.