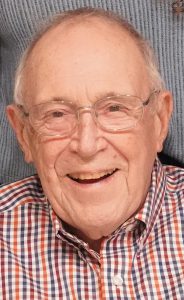 Very proud to be 90 years old, Paul (Gido to his grandchildren) passed away November 8, 2022.  He was born in Hancock, MI on March 26, 1932.  Paul was preceded in death by his parents, Howard and Mary Kramer, wife Kathryn (Farhat) Kramer, Brother Ned Kramer, son-in-law Russ Jorae and second wife Delida.  Surviving Paul are his 4 children, Paula (Chris) Johnson of Okemos, Karol (Paul) Vander Ploeg of Colorado Springs, Kathy Jorae of Laingsburg, and son Peter (Stephanie) Kramer of Lansing; 10 grandchildren, Matt (Holly) Johnson, Kristen (Sean) Brogan, John Vander Ploeg (fiancé Aubriana Hall), Adam Vander Ploeg, Janae (Zachary) McDonnell, Lucas Jorae, Chloe Jorae, Peter Kramer, Joshua Kramer, and Katie Kramer; 6 great grandchildren Eze, Hadley and Karis Johnson, Brady and Brooks Brogan, and Elliot McDonnell; sister-in-laws Weida Kramer and Dee Farhat, brother-in-law George Mansour, along with many loving, cousins, nieces and nephews, as well special friend June Zoerhof.  After attending Michigan Tech and Michigan State University, Paul entered the Army and went to Germany where he happily told us all he did was play football.  Upon his return, he entered what would be his lifelong career as a Mechanical Engineer for the Lansing Board of Water and Light where he retired in 1994 after 42 years.  He cherished his time with the BWL.  Paul was the consummate handyman and craftsman.  No project was beyond his reach as he proved many times over. He loved to build, garden, cook, and tinker with anything that had a motor.  Most of all he loved working on his 1959 Chris Craft boat.  Restoring that boat and rebuilding it several times over was something he always took pride in, but mainly served as his way to provide so much fun for his family.  Lifelong memories that continue today were made in that old Woody, and he was so happy every time we used it. We were blessed to have him in our lives for so many years, and he will certainly be missed by all of us. A funeral mass will be held at 1:30 pm, Monday November 14, 2022 at St. Gerard Catholic Church with his nephew Fr. Vincent Farhat officiating.  The family will receive friends and family on Sunday November 13, 2022 from 2-5 pm at the Estes-Leadley Greater Lansing funeral home: 325 W. Washtenaw St. Lansing, and at St. Gerard beginning at 12:30 pm Monday.  Memorial contributions may be made in lieu of flowers to the EBF3 HADDS Foundation (https://hadds.org/donate) in support of his great-granddaughter Hadley that he loved so much or to St. Gerard Catholic Church.

So sorry to hear of Paul’s passing. My thoughts and prayers to the family.

He was such a nice neighbor to have…always met us with a smile and always had time for a chat. It’s not the same on our street without him.

To Paula, Karol, Kathy, Peter and your families – I am so sorry for your loss. I loved your Dad very much. He was such a special person. I cherish the memories with all of you, your Mom and Dad. They’re some of my fondest memories, including the simple days when we used to run in and out of each other’s houses as children. Sending you all love, prayers and strength.

To Pete and Stephanie – I was so sorry to hear about the loss of your dad. He was a very nice man. I wish he had moved back to GrandHaven Manor I so we could have spent time together. I know he leaves many loving memories of good times with his family. May he RIP. Anne Burnett.

Pete and Steph,
Our prayers are with you and your whole family in this difficult time. Glad we had the opportunity to know your dad and witness the legacy of wonderful family values he passed on to you.
Peace be with you.
Jim & Jodi

To the Kramer family Paula,Pete,Karol,Kathy and friends and relatives.My condolences.Uncle Paul was a great family man,engineer, very nice person.He will be missed by all.He was able to live a great life with his family and friends.He had alot of people on that boat which he really took care of.May he Rest In Peace