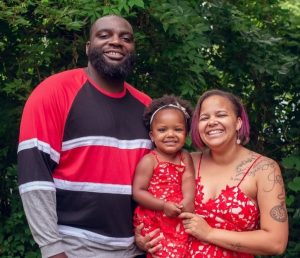 Age 30, passed away October 30, 2019.  He was born January 21, 1989, in Lansing, to Varlene Crosby and George Baber. Paul graduated from Holt High School with a state championship victory and many accolades in basketball. He went on to play in college and continued his passion for basketball after graduating from Mississippi Valley State by entering into a career of professional basketball overseas for four years. In 2013 he “retired his jerseys” as he lovingly put his choice to start driving trucks professionally so he could be closer to home and his first child, Kennedy Crosby, born in June that year. Paul was often first known for his career in basketball but more greatly known for his kind heart and determination to give back to the community. In 2014 he began his clothing company ‘Kings of Ballin’ and used his platform to encourage local youth to look to their futures; holding basketball tournaments and other events to bring Lansing together in a positive way. Paul’s favorite thing to do was laugh and his most used nickname was Gentle Giant thanks to the entire 6′ 8″ of him always being willing to help anyone at any time.

A memorial service will be held at 7:00 p.m. Thursday, November 7, 2019, at Holt High School, 5885 Holt Rd, Holt. In lieu of memorial flowers or gifts, you may donate to his family’s upcoming financial hardships at the following link: https://www.gofundme.com/f/paul-crosby-memorial-support-for-kelsi-amp-jojo.

My heart goes out to his wife and his entire family during this tragic time. May God comfort you and give you all the strength you need to get through. Continue to lean on God and he will direct your path. Love to you all!

We would like to send our sincere condolences to the Crosby family. I remember when Paul was born. My daughter baby sitter him when he was a baby. Verlene, Shatiya, Felicia, and the entire family. We love you all.

I will like to send my condolences to the family I am so deeply sorry for your loss. Paul will truly be missed.

From the entire Green Family we send our deepest condolences to the Crosby family. We love you and are praying for you.

On behalf of chosen ministry of Navarro college, we would like to express our deepest condolences to the family of Paul Crosby. Paul was a member of this college ministry bible study. May God’s love continue to comfort Paul family, friends and everyone Paul came in contact with. Sleep in heaven big Paul until we meet again on that great day.
Chosen ministry

May the good Lord give you all peace, healing and strength that you need in this time of Sorrow. On behalf of Navarro College Athletic Trainers we would like to express our deepest condolences.
Rest in Love until we meet again Round

Dear Verlean and family. I was so saddened to hear of the loss of your son. My love and prayers to you and your family, especially his wife and daughter. May God bless all of you during this difficult time !

From the entire Haynes Family we send our deepest condolences to the Crosby family. We are praying for you and family.

I will never forget you big little brother…..