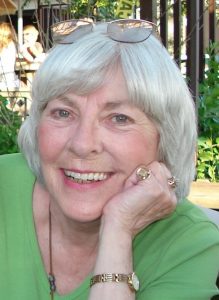 Patricia Ann Townsend (Trevithick) passed away peacefully on April 3rd, 2021 at the age of 81. She was affectionately known by her grandchildren as “Gaga” and they were the light of her life. She was the second oldest of 6 children to William and Helen Trevithick and was the last surviving sibling. She was preceded in death by her husband Eugene, in 1982. While family and friends mourn the loss of Patricia, there is peace knowing she has been reunited with Eugene at long last. She was also preceded in death by her stepdaughter Patricia (Keith) Meador. Patricia is survived by her children, David (Lynette) Townsend and Karen (Jason) Townsend Hagens; stepchildren, Eugene (Linda) Townsend III, Elizabeth (Tracy) Gordon; and grandchildren: Caroline, Lauren, Megan, Emma, Cameron, and Charlotte.

Patricia was born and raised in the Detroit area and a graduate of Denby High School. Her success as a manager with Prudential led her to Lansing, where she met Eugene and raised a family. Patricia was a great cook and a talented artist who enjoyed painting and drawing for many years. In her retirement years, she spent time in both Michigan and Gulf Shores, Alabama. She eventually moved to Raleigh, North Carolina to be near her daughter and youngest grandchildren.

Those that loved Patricia describe her as kind and determined, strong and independent, with a loving spirit. She adored nature, animals, and old movies. She had the biggest and most surprising sweet tooth for someone of her petite size. Milk Duds, M&M’s, and Coke were never very far out of reach for her or for her grandchildren. She will be so missed by her children, grandchildren, many friends, nieces and nephews.

A graveside visitation will be held at Deepdale Memorial Gardens in Lansing on Monday, April 12th, at 12:30 p.m., followed by a graveside service at 1:00 p.m.

In lieu of flowers, the family asks for you to consider donating in Patricia’s name to the Alzheimer’s Association. Arrangements are by the Estes-Leadley Greater Lansing Chapel.

Karen, I am so sorry for the loss of your sweet mother. I know how hard it is to lose one’s mother. My thoughts and prayers are with you and your family. Love you.

Blessings to the family and friends of Patricia Ann Townsend. May her memory bring you peace even in this moment of profound grief.

David and Karen Ann, your Mom was a kind, strong, and generous woman who did many wonderful things in her life to help others. Most of all, she loved her family. I’m so sorry for your loss.
I love you, Aunt Myra

Karen and David, Jason and Lynette, Caroline, Cameron, Charlotte, Emma, Megan, and Lauren; I knew your mom/grandmother from the Fourths of July over the years. She was so kind, and easy to be around. I know you will miss her. Her loss means there is one more angel today. I don’t ever recall a time when she was not smiling Let her example be an example for all of us. Revel in the strength she showed and let her memory shine brightly.

My Dear Aunt Pat! I am so grateful you were a part of my life. You nurtured me as a kid with humor and kindness. Your laugh let me know on some deeper level life was good. Your humanity illustrated the connection between us all. I miss you and I also take you with me.

David and Karen, please accept my love to your whole family in your time of great loss. I look forward to more days and years with you on Clarklake.

I’m very sorry for your loss. I went to high school with your mom and she was my brides maid in 1959. Sharon, Pat and i were the 3 musketeers.

Thoughts and prayers with the passing of your mom. I am saddened with her passing as all the wonderful memories come forth of the countless times I was blessed with her wisdom, guidance, and compassion!
She was an absolute angel and still is…

She was always my second mom in Marmoor and at Clark Lake. Wow, the good times spent with memories of her and her great meals! Just don’t play chicken on bikes in front of your house…I still remember her reaction vividly right before impact….lol!

Condolences to you and your families. I will always remember and miss Mrs. T.