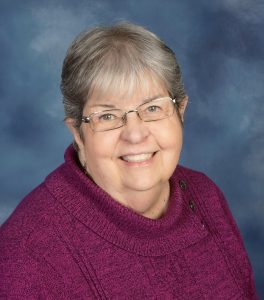 Nina went to be with her Lord and Savior on Thursday, March 19, 2020 at age 78.  She was born November 16, 1941 to Clifford and Emma Foster in Ironton, Ohio, but they moved to Onsted, Michigan when she was 2 years old.  She had one younger brother and three younger sisters.  When Nina was in 9th grade the family moved to Ann Arbor due to her father’s illness and his position as a civil engineer.  They lived there until Nina’s father’s death in 1957.  Her mother relocated the family to Lansing in that year so she could be closer to her family support system, including her brothers and sisters.  They lived on West Saginaw Street and Nina attended Sexton High School.  She also worked part-time at Watt Pharmacy during her school years. Nina’s mother worked on the switchboard at Oldsmobile. Nina made many high school friends who had remained close throughout the years.  She and Carol Kienke, who lives in Dewitt, enjoyed meaningful activities together, including visiting classmates in other locations.

After graduating from high school, Nina studied one term at MSU and then became employed at Michigan Bell.  She married Ron Darling in 1960, whom she had dated the year after high school.  Following her daughter Leslie’s birth, Nina became a full-time homemaker and mother.  Sons Phil and Mark came along later.  Nina said she enjoyed these 10 years, especially cooking for her family.  She also served as Brownie leader in Leslie’s troop.

When Nina became a single parent she went back to work at Michigan Bell.  One of her coworkers set up a blind date with David Machtel in November of 1980.  The two of them found much in common during their dating months and got married in June of 1981.  David was the father of four adult females and was employed at WJIM television station.  They moved together to a home in Okemos.

Because Nina and David had enjoyed vacationing in Florida, they decided to move there.  Nina transferred her Michigan Bell/AT&T position to Orlando.  They stayed in Florida 3 years, but came back to reconnect with family and friends.  They purchased the home in the Groesbeck area, where Nina continued to live. Nina resumed her employment at AT&T in Lansing until her retirement in 1993.

Nina began volunteering at Southside Soup Kitchen at Potter Park United Methodist Church in 1998.  When a staff member approached her to become a cook for this ministry, Nina readily said yes because she had always enjoyed cooking.  In the twenty years that followed, Nina experienced two more changes in location to Christ United Methodist and St. Casmir Catholic Churches.  The name of the ministry also changed to Southside Community Kitchen.  Nina said, “I liked being with people who enjoyed what they were doing. They were there because the wanted to be; with joyful hearts!”  Nina met many volunteers and guests who were enriched by her food and her friendship.  She was recently honored for her many years of service at the Kitchen’s Volunteer Luncheon.

An overwhelmingly tragic experience happened to Nina in 2009.  While visiting her ill brother in North Carolina, her beloved husband David had a massive stroke.  Following surgery and an 8-day stay in ICU, David lost his struggle and died.   She grieved his passing.  Nina’s mother and siblings are all deceased.

Nina’s faith journey began as a young child at Onsted Gospel Church, the only church in that small town.  It became “the center of her life and where her faith in God was established.”  She attended Sunday mornings, Sunday nights, Wednesday prayer group and many other activities.  Her journey continued when she came to Lansing, where she worshiped and enjoyed youth group at Westminster Presbyterian Church.  She also married her first husband there.  Nina and Ron became members of Mount Hope Presbyterian after Leslie was born because they wanted their children to grow up in the church.  This was also Nina’s mother’s family church, which included several of her aunts and uncles.  Nina says, “Mount Hope has always felt like family.”  She especially enjoyed serving as deacon.  She has taught Sunday school, lead youth groups and is an elder.  Nina has shared her gifts of caring and cooking with her Mount Hope Church family. She’s visited homebound members, maintained the prayer chain and the information tree.  She has also created delicious meals for church dinners and funeral luncheons.

Nina and her husband David respected each other’s faith traditions; he as a Christian Scientist and she as a Presbyterian.  Nina said, “My faith has shown me we can make it through thick and thin with God’s help.”

Private family burial will take place at Evergreen Cemetery and a public memorial service will be held at a later date.

In lieu of flowers memorial contributions, in loving memory of Nina, may be made to Mt. Hope Presbyterian Church or the Southside Community Kitchen.

I truly enjoyed working with Nina for a number of years at the Southside Community Kitchen. She was so calm and patient and kind, a joy to be around every day.

She was my best friends since the 10th grade. We were competitors, travel buddies, neighbors, shoulders to cry on, faith followers, confidants, go to persons and best of all…best friends. I will miss her more than words can say. I am grateful for all the time we were able to spend traveling and experiencing adventures. We had talked about death and I know she was confident in where she was going and I take great comfort in that. I’m so thankful that she didn’t suffer long, that ehe was able to stay in her own home and that she wasn’t alone.
May the angels welcome you to paradise my dear friend.

Nina and I met in 1963 when she was pregnant with Leslie and I was pregnant with Barb. We lived across the street from each other for years on E. Greenlawn. She was a cherished friend for 57 years. We laughed, we cried, we shared life, we shared hard times. We connected immediately and stayed “best friends” for life. I admired her always–her sensitivity and compassion for others. She had a unique ability to “word” awkward moments in communications. I know she always wanted to pass suddenly as my husband did. I’m so thrilled she managed to stay in her home with the support of Home Hospice. I will miss her dreadfully and want to express sympathy to Leslie, Phil and Mark as I surround them with love, peace and support at this time of loss.

I’ve known Nina my whole life, she and my late mom, Carolyn Jordan, were childhood friends. Even after my mom passed away Nina was still a constant in my life, meeting for lunch with Carole Kienke was always a highlight! You will be missed Nina! Say hello to my mom! My love to Leslie, Phil & Mark, xoxo

I am so sorry to hear that Nina passed away. I am a old neighbor who lived behind her on Lincoln and we used to have morning coffee with Nina, Carole and Kaye. We had many talks and fun times. Nina had babysit for me a short while when I went to work, I had 3 children, Kathy, Jennifer and Darryl. The last 3 or 4 years she and Carole have visited me in Florida where I spend winters. You will be in my thoughts and prayers.