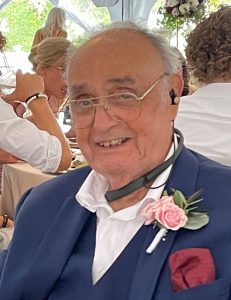 Nick Voutsaras passed away peacefully surrounded by his family on September 28, 2022.  Nick was 95 years young.

Nick is survived by his loving wife of 65 years, Elizabeth; children Spiro (the late Diana), Elise, and Alexis; grandchildren Niko, Paulena (Ryan), Kelly Hart (John) and family; and a host of nieces, nephews, and other relatives.  Nick is preceded in death by his three brothers and one sister.

Nick was born on March 2, 1927 in Koppel, Pennsylvania to parents Spiros and Ouranea. Nick was a Veteran of World War II.  He served in two overseas tours, one in France with his brother Ted and one in Japan training American soldiers.  Upon returning from the service, Nick attended meat cutter trade school and then proceeded to begin his 72 year working career.  In 1991, Nick suffered a hunting accident, losing his leg above the knee and requiring him to wear a full prosthetic leg.  Even after his accident, he continued working.  In March 2020, Nick retired from his last job at Tom’s Market in Okemos at age 93 due to the pandemic.

Throughout Nick’s life, one of his greatest joys was deer hunting with his brother Ted in Michigan where he made 74 consecutive opening days in a row.  His son Spiro and grandson Niko eventually joined the hunting crew and enjoyed many years of hunting memories together.

Nick lived a happy and good life.  The things he treasured most were his wife, his family, his friends, his dog Gracie, his deer hunting, and always his black coffee.

The funeral service will be held at 11:00 a.m. Monday, October 3, 2022, at Holy Trinity Greek Orthodox Church, 1701 E. Saginaw Street in Lansing.  His family will receive friends at the church beginning at 10:00 a.m. on Monday, with a Trisagion service at 10:30 a.m.  In lieu of flowers, memorial contributions may be made to Holy Trinity Greek Orthodox Church in memory of Nick Voutsaras.  Online condolences may be left for his family at www.EstesLeadley.com.

My deepest sympathies to the whole family. Love greatly one another and keep his memory alive.
May his memory be eternal.

My deepest sympathies to the whole family. I loved talking to Nick with the very small moment of time I had knowing him. I will miss him calling out for Gracie in the early hours of the morning.

Dear Alexis and family, I will always remember how warm and welcoming both your parents were when I visited. I am so sorry.

Dear Elise and Family my deepest prayers for your entire family. Elise unfortunately I never had the pleasure of meeting your father however I feel as I knew just a small part of his life thru your stories & pictures over the years you graciously shared. I know beyond the shadow of a doubt why you are the loving, patient & caring persons for others is because your watched your parents thru their giving life’s to all they came in contact with. Rest In Peace Mr. Voutsaras for all that you made smile.

To the Voutsaras family, I know how much Niko loved to hunt with his Dad, Spiro and his Grandfather. These are great memories that will carry on forever. All will be in Melissa and my thoughts during this time.

Dear Spiro and Family:
Our sincere condolences go out to you on the passing of your beloved Father. Praying that the beautiful memories of the times you shared with him throughout the years will bring you peace and comfort in the days ahead.
With Love, Karen Adams-Powell & Family