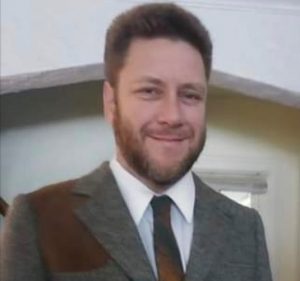 It is with the deepest sadness we mourn the loss of Nicholas Franklin Gigante.  Nick was an amazing person whose love for his family and friends was tremendous, and we are all bonded by the blessing he was in our lives, as well as in our grief of letting him go on October 6, 2020.

Nick was born in Petoskey, Michigan on May 17, 1974 to Judy Ellen Gigante and Lawrence Francis Gigante.  His loss is felt by his parents, his sister Theresa Gigante, and his older half-brother Tim Berry.  Nick was also deeply loved by his wife of 16 years, Kristine Gilbert-Gigante, and their children- twins Lorenzo Kenneth and Nora Marlo, and daughter Ada Marie.  Nick was a best friend to so many and a beloved member of an extended family.

Nick was a deeply present son, working tirelessly on projects with and for his parents and in-laws. As a dedicated stay-at-home father, he raised his children with animated stories, adventures in parks and libraries, homemade meals, an unfaltering presence, and fresh vegetables that he grew every year. He lovingly supported and celebrated his wife’s work and interests, and dedicated himself to the wellbeing of his family.

Nick spent most of his life living in Lansing Michigan, where he maintained his love of his friends from childhood as well as his love for heavy metal music, old cars, and upholding traditions. As a graduate of Northwood University, he held many occupations, was a talented woodworker, and carried a passion for so many things.  He spent much of his time working on documenting the legacy of his grandfather, Frank Winchell, and was an avid Corvair fan.

To say that Nick was a huge presence in this world would be an understatement. He was a giant of a human, with a heart that was actually bigger than his shoe size.  He was loving and silly, serious and carefree.  He was curious and passionate, kind and generous, sentimental and deeply loyal.  All who knew him know he was the best friend, son, dad, husband, sibling, uncle, cousin, nephew, and grandson (he would not want any of these titles left out) and his laugh is one all will hear for the rest of our lives, because it was pure and beautiful, and we can hear the heart of Nick in the echo of that giggle.

A wonderful person left our world, but he left us with a legacy of love. When he took his last breath, a wave of love filled the room.  His parents and wife recognized it as a powerful release of the love he held for all of us, and the loving embrace of those he lost before. His gift to us will guide us in our grief, and we will forever celebrate Nick Gigante.

The family asks that donations be made to Nick’s wife and children. A gofundme page has been set up to accept donations. You can find it here. Donations to Nick’s children

Our hearts are laden with the sorrow of Nick passing away. Words do not come easily at a time like this. But you know we are with you in spirit as you mourn. May God keep you all close in His heart and safe in his love.

Our deepest sympathy to the Gigante and extended family during this time of sorrow.

What a beautiful obituary. I didn’t know Nick except through his wife but after reading this I wish I had. God bless to you all.

Sending many hugs and wishing you all the comfort and love that can be felt in this painful moment, moments, and in the quiet times to come. I am so sorry & send my condolences for your family’s loss.

I did not know Nick personally but met him many times over my years of friendship with his wife, Kristine. I am sending my love to Kristine and the kids and all of Nick’s loved ones. This loss is so huge, there are no words to convey how much I pray for everyone’s peace and healing.