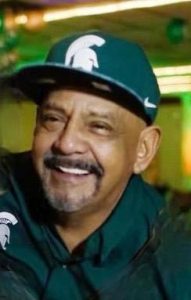 Age 75, passed away December 18, 2021.  He was born December 3, 1946, in Camp Ruby, TX, to Jose and Felisiana DeLaPaz.  First and foremost, Milton loved God.  He attended Maranatha Assembly of God Church since he was a teenager.  He was an autobody technician all of his life, until retirement in 2008.  Milton loved detailing his vehicles.  He also loved football, MSU sports (he hated the U of M Wolverines).  He also loved all kinds of music, dancing with his grandkids, spending time with his family, drinking Bud Light, and driving his hotrods.  He was always the life of the party and always willing to give a helping hand.

The funeral service will be held at 12:00 p.m. Monday, December 27, 2021, at Maranatha Bilingual Church, 927 E. North St., Lansing, MI  48906.  His family will receive friends at the church from 11:00 a.m. until service time on Monday.  In lieu of flowers, memorial contributions may be made to Maranatha Bilingual Church in memory of Milton DeLaPaz.

Fly High Tio I know you’re having a wonderful Heavenly party in Heaven With your family. And with my Mama your sister Josie . I happy that I got to spend time with you , Before you went to be with God You’ll truly be Missed Love you Tio!

I love you papa I miss you so much already.

No more pain God needed you more than people out here I didn’t know you too well but I know my daughter called you Grandpa Papa and I know she had love for you and all of your family may you be at peace and rest peacefully. And may God be with your family.

Know you are at rest. Fly high. My prays and love are with you and your family at this time of sorrow.
My granddaughters will miss you dearly. They will have many memories of you and them together.
Rest In Peace papo.