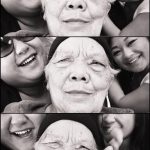 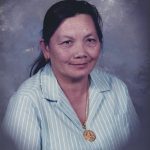 May Xiong never gave up in the face of adversity. From her journey to America from her war-torn country of Laos to being diagnosed with Parkinson’s Disease that eventually made her mostly immobile, she never let anything stopped her from living life the way she wanted to.  On the early morning of October 7, 2020, May passed away peacefully.  She was 86.

Born on May 2, 1934 in Laos to Xia Seng Xiong and Kue Yang, she was the oldest of three children. She would meet and marry Blia Tong Lee and together they had eight children: five boys and three girls. During the Vietnam War, May and her family along with thousands of other Hmong families fled by foot to neighboring Thailand seeking refuge.  They would stay in the Ban Vinai Refugee Camp in Northern Thailand for more than three years.

On June 28, 1984, May and her family were sponsored by a Christian church to resettle in Lansing Michigan. She spent the majority of her early years in America living on the north side of Lansing where she continued to enjoy her favorite pastime of gardening and sewing traditional textiles. Her husband would eventually remarry but they continued to co-parent for more than 60 years until his passing earlier this year.

In 2004, May was diagnosed with Parkinson’s Disease. An incurable progressive nervous system disorder that affects movement, May’s early symptoms started with tremors in one of her hands. Gradually, the disease started to effect one side of May’s body and then eventually her entire body. May fought and managed the disease for 16 years until her passing. May is survived by her 13 children and step-children, 64 grandchildren and great-grandchildren and one great-great-grandchild.

May is best remembered by her big heart and nurturing instincts. She always found a way to provide for all of her children and grandchildren with what little she had. She never learned how to drive a car but walked everywhere she could. She never learned how to read or write in English but she spoke through her kind gestures and loving care.  Even during the last couple months of her life, she still made sure to ask visitors how their day was, whether or not they had eaten and most importantly, give them advice for living a happy and fulfilling life with no regrets just like she had.