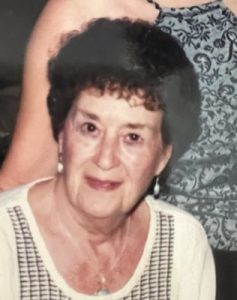 Mary Lou began her next journey on July 15, 2022, in Traverse City, after a brief illness.

Born in Lansing to Cassie and H. Lester Hunt, she lived in Holt for 61 years.  She graduated from J.W. Sexton High School & attended St. Mary’s School of Nursing until her marriage to Robert L. Howe, whom preceded her in death after 42 years of marriage.  After her marriage, she was the office nurse for Lansing pediatrician Dr. Robert J. McGillicuddy.  She then changed careers & began a new job at MSU Stores as administrative assistant, where she worked for 27 years.

Mary Lou and Bob raised 3 children, Pam, Tom & Maureen.  After the children were grown the couple enjoyed several trips to England & Scotland, and throughout the United States.  They also enjoyed their “home away” at Upper Silver Lake, hosting many family & friends gatherings.  After Bob passed away, Mary Lou continued to travel, visiting her sister Kathleen & on international trips with Maureen.  She was an accomplished gardener & maintained a keen appreciation of nature.  She enjoyed reading & always had music playing in her home.  She and Bob were early members of St. Augustine’s of Canterbury Church in Mason & worked to establish it along with others in the congregation.  She remained a faithful Episcopalian her entire life.

After Bob passed away, Mary Lou lived life on her own terms, often to the consternation of her family.  She was fiercely independent & insisted on remaining in the family home until her final illness.  She passed these traits to her daughters, as well as a love of gardening & chocolate!

Those who wish may make memorial contributions, in loving memory of Mary Lou, to either the American Lung Association or to WKAR.org

I Will miss you as a neighbor dearly, but always will remember the many Friday nights in club house having cocktails, then walking you home. Umber wasn’t available at that time, that was the blind leading the blind! Rest in
peace my friend. Sue Granger

Maureen: So sorry on the loss of your Mom. She, you, and your family are in my prayers.

Bishop Perry and the staff of the Episcopal Diocese of Michigan send their condolences to the family of Mary Lou Howe. We are grateful for the years that Bob and Mary spent in leadership at St. Augustine of Canterbury Church in Mason. May God’s peace be yours.

Just a friend of Maureen