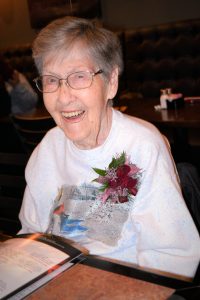 Marion Edna “Tootie” Hoskins left this earth to join her husband Marvin, of 57 years, on November 22, 2019 after a separation of over 20 years.

Marion was born in Lansing, MI, on November 21, 1920, to Hugh and Matilda Angell. While growing up in the country, she attended Grovenburg Church and Country School, moving on to Walter French and then graduating from Eastern High School in 1938.

Marion and Marv were married March 28, 1942. She was working as a hairdresser in Mason when she had her first daughter, Linda Sue, followed four years later with a second daughter, Jill Elaine.  As her family was growing, she decided to stay at home, occasionally volunteering with the elections which she would do throughout her life. Later she worked for Arbaugh’s Department Store in downtown Lansing but most of us remember her smiling face at the MSU Bookstore in the 1980s.

Besides her family, she loved square dancing with Marv and their friends.  She was also devoted to her church, Christ United Methodist Church, and loved to sing in the choir. She enjoyed sewing, crocheting, knitting, reading and crossword puzzles. Later in life she took pleasure in making hats for newborns at Sparrow Hospital. She loved spending time with her friends at Sam Corey Senior Center.

Donations can be made in lieu of flowers to Hospice of Lansing or the Greater Lansing Food Bank in her name.

A very special woman; Glad she is now with Uncle Marv