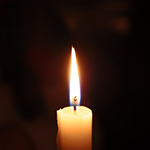 Marion, of Lansing, entered into eternal life October 12, 2010 after a wonderful, faith-filled life of 97 years.

Throughout her life Marion remained steadfast in her priorities—faith and family. She was an outstanding cook and baker. Musically gifted, she played the clarinet in her high school band and under the direction of John Philip Sousa at Interlochen Music Camp. Classically trained, she skillfully played piano for most of her adult life. She was also quite a pioneer. Unusual for the time, she left her Escanaba home in 1932 to come to Lansing in order to be able to work during the Great Depression. She returned later to Escanaba where, in 1937, she became the first woman from Michigan’s Upper Peninsula to obtain her pilot’s license

She married Bob in 1943. He died in 1969. Marion returned to work after her youngest child began school. She served for three years as the secretary to the principal of what was then St. Mary Cathedral High School and thereafter for 22 years as the St. Mary Cathedral parish secretary. After her retirement, Marion continued to serve joyfully into her 80s as a volunteer in various Diocesan offices including Hispanic Ministry and the Office of Education.

Visitation will be held at the Estes-Leadley Greater Lansing Chapel on Friday from 2 to 4 p.m. The Vigil for Marion will be held at St. Mary Cathedral (219 Seymour) on Friday evening from 6 to 8 p.m. The Rosary will be prayed at 7 p.m. The Mass of Christian Burial will be celebrated at 10:00 a.m. Saturday, October 16, 2010 at the Cathedral, with her son, Fr. John Byers presiding. Rite of Committal will take place afterward at St. Joseph Cemetery. In honor of Marion’s longtime support of Catholic school education, contributions can be made to Immaculate Heart of Mary Parish, 3815 S. Cedar St., Lansing, MI 48910, for the Fr. John Tuition Assistance Fund.