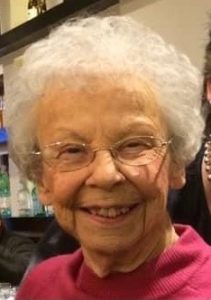 Marilyn Jean Waltz died February 17, 2021, exactly 8 weeks after suffering a fall.  She was born May 13, 1926 in Lansing, MI, the daughter of Belle and Harry Wooton.  She was preceded in death by her brother Charles Wooton and husband Leon Waltz.

Marilyn was a 1944 graduate JW Sexton High School.  She met Leon while working in the office at Oldsmobile and they were married April 29, 1949.  Marilyn worked at Auto Owners Insurance in downtown Lansing for 8 years until daughter Carolyn was born and made many lifelong friends there.  She was church secretary at Mayflower Congregational Church in the 1980s where she also made many dear friends, and was a member of Grace United Methodist Church for many years.

Marilyn took excellent care of her mother and her husband during their long illnesses.  She loved her time at Wolf Lake for 30 summers, and enjoyed crossword puzzles up to the end.

Marilyn will be greatly missed by her daughter Carolyn Waltz and kitties Tinker and Bob, as well as her adopted family Robyn and Paul Hartfield, Maria, Paul Jr. (Marie), and very special light and honorary grandson Robert Hartfield.  She is also survived by niece Laurie (Greg) Crawford, and nephews Jon (Anita), David, and Marc Wooton as well as her great nieces and nephews.

She was such a kind and sweet lady. It was my pleasure to have known her. My best to the family.

Thank you Ron. She was able to take complete care of herself until she fell.

Thinking of you Carolyn. Your parents were so nice. I remember them well from Grace Church and from living up the street from them on Gordon where my folks lived.

Thank you Laurena. That was such a wonderful neighborhood

My deepest condolences to you Carolyn and the extended family. I have such wonderful memories of your parents. They will always be remembered with great fondness and hold a special place in my heart.

Dear Carolyn, we were sorry to hear that your Mother has passed. She was always so nice to us. Think of all the wonderful things the two of you did over the years. May God bless you as you go through this difficult time. Love and prayers, Helen & Al Holcomb