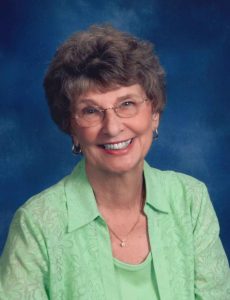 Marilyn was born in her family home in Holt, Michigan, October 17, 1934 (and given her first teaspoon of water by her father shortly after delivery). She grew up in the post-depression era leading a simple life in that same home, which did not receive indoor plumbing until she was 16. She stayed at home until she married her husband, Russell, in 1955 and built a brand new, state of the art home that she was so grateful for and proud of in a nearby subdivision in Holt. She raised her family and played “social butterfly” until 1984 when she and her second husband, Charlie, moved into a very comfortable home in Charlotte.

Marilyn attended the Holt Public Schools K-12, graduated with the class of 1952, worked as a Medical Assistant for Dr. Franklin Troost from 1952 to 1958, was a stay at home mom 1958 to 1972, then returned to work as a Dental Assistant for Dr. Edward Jennings from 1972 to 1984. Upon retirement she and Charlie spent 26 years wintering in Estero, Florida (Fort Myers) and enjoyed spending as much time as she could with her grandkids while still finding time to travel to all 50 states.

Later in life Marilyn’s needs became simple: the four “C’s”: clothes, coffee, chocolate and conversation. She loved to shop for clothes. She carried on an Edema family tradition of drinking black coffee regularly. She loved anything chocolate, especially dark chocolate or a Heath Bar. As for conversation the phone was always her go to for family and close friends but the daily trip to McDonald’s or the 3 p.m. trips to Meijer or the Great Lakes Christian Home lobby became the norm for socializing.

Words used to describe Marilyn are classy, kind, generous, caring, willing, fun, and loving. Although she appreciated the finer things in life, family was her priority and friends/relationships were important but God was always first.

Marilyn was raised in the Baptist Church and attended “Bible Believing” churches (Lansing South Baptist, Holt Baptist, Miller Road Bible Church, and most recently Charlotte First Baptist). She partook in Communion, prayed before meals, participated in Bible studies, was a regular attendee and Sunday school teacher, but when Alzheimer’s progressed she preferred to stay in her room and watch Dr. Stanley on TV on Sunday mornings.

There are too many friends to acknowledge but thank you to all who have been part of Marilyn’s life, especially those who were such a comfort to her in her final years (the GLCH friends and staff, Garth, Robinwood Landing staff, John, Hospice of Lansing, and MJ).

The funeral service will be held at 11:00 a.m. on Wednesday, November 23, 2022, at New Hope Church, 2170 E. Saginaw Hwy., East Lansing, MI. Interment will be in Maple Ridge Cemetery, Holt. Her family will receive relatives and friends beginning at 10:00 a.m. on Wednesday at the church. In lieu of flowers, memorial contributions may be made to Great Lakes Christian Homes, Holt, Hospice of Lansing, or to New Hope Church. Arrangements are by the Estes-Leadley Holt/Delhi Chapel.

Nancy, Dave, Janelle and families. What can I say? Words are never my problem but they are now. So many memories are flowing through my head

Know that my prayers are with you all. If there is anything I can do, please let me know.

So sorry for your loss. Marilyn was a Holt High School friend. I remember going to the Williams’ home and Marilyn made fudge. We were in the same classes even in high school. I enjoyed seeing her at our class reunions with her brother, Charlie. I remember the day she called me to let me know she was diagnosed with Alzheimer’s. We both cried. She has been in my prayers ever since.

We are so sorry for your loss. Marilyn was as classy as they came and both she and Russ (and then Charlie) were like second parents. More fond memories than we could possibly share. We wish we were closer and could be there. You are all in our thoughts and prayers.

Lots of good memories with Marilyn. She was always gracious and quick to laugh. Regret I couldn’t talk her into a trip to Indiana. We would have enjoyed it. Hope you all remember her with stories of good times you shared. She told me her favorite times were hosting dinner parties. Know the holidays will be rough. She’s surely at peace now.

Marilyn, was a wonderful lady ,shared many conversations. She will be dearly missed. Always on my heart.
Unable to attend service ,working.
Keeping family in my prayers.

Blessings and prayers for Marilyn’s family. I am sure she will be missed, but always in your hearts…Light and love…

Thank you for your kind words and support, my friend.