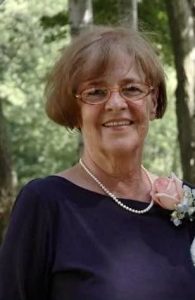 Maria Nagler, 74, of Saranac, Michigan, passed away February 18, 2021 after a short battle with cancer.

Maria was born in Eisenerz, Austria on March 10, 1946 to Ernst and Stefanie Nagler, who preceded her in death, along with her nephew Harold Nagler.

Maria had a passion for helping others, specifically those with disabilities and older adults; and worked as a health care aide for many years. Her hobbies included anything that involved her family, classical music, playing the piano and recorder, reading, and crocheting. She never missed an episode of Rachel Maddow. Maria was recently saddened by the death of her beloved doggie Baby, who had been her constant companion for many years.

The family would like to thank those who have reached out with their condolences, love and prayers, and especially the kind words and memories that were shared. Adjectives used were “kind, caring, helpful, proud, passionate and smart.” An analogy of her nature would be that Maria would give someone her coat if they were cold, even if that meant she would go without. Some would say she was “glamorous” and “Intriguing,” always smiling and happy – and her girls and grandchildren were her world.

The family will announce a date for a Memorial this summer. In lieu of flowers, memorial contributions in Maria’s name could be made to the Ionia County Commission on Aging, and if you are unable, you can also opt to watch 7 days of Rachel Maddow and that would make her happy.

So sorry for your loss-prayers to you & your family

Thank you, she will be dearly missed.

I am so deeply sorry for your loss, Maria was a vibrant, lovely women.She will be missed and I hope the family can find some comfort during this difficult time.

Thank you for your condolences Heather. She thought you were a lovely person as well, and I am glad you two had the opportunity to meet.
She will be missed beyond measure.

So sorry for your loss. I didn’t know your mom well but she was a beautiful woman and I am happy to have met her. I pray for comfort for your family in this difficult time. Christine RN

Thank you for your kindness and sympathy Christine. My family and I are very grateful for the comfort and care she received from you. #nursesaresaints