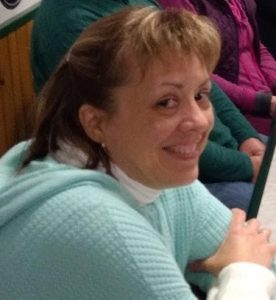 Marcia Lynn Holmes, age 55, went to be with her Lord Thursday, September 15 at her home in Mason, MI, after a courageous battle with cancer.  She was born to Edward and Christine (Adams) Keezer on March 23, 1967, in Ann Arbor, Michigan.  She grew up in Chelsea and graduated from Chelsea High School in 1985.  She was born again on April 23, 1986, in East Lansing, Michigan.

Growing up on a farm, Marcia loved animals and the outdoors.  She could always be found helping her grandpa and dad milking cows and tending to calves.  She loved working in her yard, planting flowers, gardening, music, and traveling.

Marcia was completely devoted to her family.  She homeschooled her two sons through their graduation and participated in the Lansing Christian Home Education Support System (CHESS) organization.  She was an avid swim mom and served as a board member for WaveRunners, a competitive swim club in Lansing.   She was a convention coordinator for the Information Network for Christian Homeschoolers (INCH) for many years.

Marcia was a beloved wife, mother, and grandmother and will be deeply missed by her family until they are reunited in heaven.  She will be remembered for her initiative, creativity, devotion, hard work, friendliness, and a smile that could melt hearts.  She served the Lord as a care provider for several family members and friends.  She loved the beauty and awe of God’s creation and visited nearly all the continental US national parks.

Your family has been in our thoughts every day and want you to know you have our sincere condolences. We are so saddened to know the hardship you are going through. If you need anything do not hesitate, we will be there.

‘So with you: Now is your time of grief, but I will see you again and you will rejoice, and no one will take away you joy.’ -John 16:22

I am so sorry to hear the news of Marcia’s passing. She will be missed. Her life is a testimony of God’s faithfulness and goodness. I am so thankful for heaven and the hope we have of seeing her again one day in heaven. Jesus is alive and so is Marcia! Praising Him for these facts!

Thank you Lord for allowing me to meet someone who had a loving spirit. Marcia reached out to me through our class together. Bible Essentials For Today. She reached out to give me lots of information that I missed. That was God’s love showd to me through her. That beautiful smile and spirit will truly be missed. I will see you again.

I have known Bernie and Marcia for over 25 years. Over these years, I have come to really appreciate Marcia’s desire to really know the Lord that she loved and served. You could see through her time in our Bible classes. She loved the Word of God. I will miss her gentle spirit and insights into the Bible. She was an example of the love of God to all those who spent time with her. I will miss our Bible discussions around the lunch table, especially at Culvers. I know she is rejoicing in the very presence of her Savior. Butch

One eulogy from the service for Marcia Holmes;

The word that comes to mind when I think of Marcia is Community. Marcia gravitated towards, and fostered, community in her life. Whether it was in the home-school community, the church community, Mason, or in our swim club community, if Marcia was there, she was THERE.

I’m Bill Copland. I met Marcia on the pool deck at Lansing Community College in the Fall of 2005. Ten-year-old Vaughn and twelve-year-old Tyler had just joined the Windemere Park WaveRunners Swim Club. That Fall, I had just added job of head coach of that program – along with my Delphinus Swim Club program.

The swim club happened to be the community she and I shared. I have coached swimming going on 50 years next year. Whether it be jr. high, high school, college, masters, or club swimming, you learn to recognize community when you see it. Not every program has it. But you sure learn to recognize it and appreciate it when it’s there.

My Delphinus program was a totally coach-owned and coach-run club that I had run for over 15 years when we met. WaveRunners was a fledgling club held together by a group of parents who saw the physical and social benefit in having an organized, physical program. Most of the families were from the Windemere Park Charter Academy. They had a parent board of interested parents, but no one who had swimming experience and their second head coach had just moved away.

Since we both used the Lansing Community College pool as our home practice facility, it was natural that we could combine forces. It didn’t take long before Tyler and Vaughn were immersed in the team, and Marcia joined the WaveRunners board. Marcia was active from the start. She was a steady influence, always thoughtful and calm with solid ideas. Always there when needed.

Being raised on a farm, she knew the value of discipline and hard work. She did not seek the spotlight. She was humble and unassuming. But she was always there, usually in the background, and always with a thoughtful take on the topic at hand.

As the programs evolved, we eventually came together with the board becoming a single booster/support organization for both teams. The teams shared pool time, coaches, and meets. Our community was strong, due in no small part to the support of that board.

While some board members came and went through the years, Marcia, along with Mary and Kathryn were the core for many years – not as a power play, but for the good of the program.

Vaughn and Tyler were both a part of the program for 8 years as swimmers and both helped coach during and after their swimming days ended. Marcia remained an important and valued asset to WaveRunners/Delphinus during that time.

I will always value and appreciate the time and effort of Marcia and that board. They were instrumental in creating one of the best communities of my coaching career. I will treasure the memories.