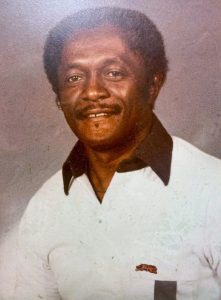 Age 87, of East Lansing, MI, passed peacefully on July 4, 2020. Major was born October 17, 1932, to Rufs and Lula Bogan, in Wyatt, Missouri. Major spent the majority of his life in Michigan. He retired from the Whirlpool Corporation after 35 years of service. Major loved fishing. He was also a man of faith, and he devoted a lot of his time to the Union Memorial AME Church of Benton Harbor.

He was preceded in death by his parents; three sisters, Lula (Jessy) Bogan, Emma (Joe) Moore, and Elizabeth Atkinson; and a brother, Joe Bogan.

Per Major’s wishes, the family will have him cremated. There are no services planned at this time.

My sincere condolence and sympathy for my entire family. Peace and Love

Rest In Peace my dear uncle.
your fishing buddy,
dean

Condolences to the family. May the peace of God comfort you through your bereavement.