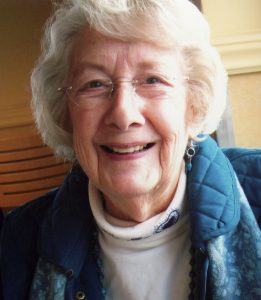 Louise Godbold passed away January 18, 2020, in Lansing, Michigan, at the age of 99, after spending the day with her family.   We are taking the time to celebrate her life.

Louise was born June 16, 1920, in Gadsden, Alabama, to John and Anita Shahan, one of four daughters along with: Lucie, Helene and Anita.  She and her family moved to Clearwater, Florida, in 1934, which is where she met and married Lieutenant Basil Ivon Godbold of Rodney, Michigan, on September 12, 1943.  Basil was stationed at Dunedin, Florida, while serving in the United States Marine Corp.   She and Basil had five children: Kathy, Larry, Tom, Steve, and Richard.   She had nine grand children:  Elizabeth, Ryan, Ian, Anissa, Eric, Kevin, Jeffrey, Scott and Steven.  She had five great grandchildren: Madeline, Tristan, Juniper, Harlan and James.  Louise is preceded in death by her parents, John and Anita Shahan; her sisters, Lucie and Anita; her husband, Basil; son, Steven; and grandsons, Ian and Jeffrey.   She has many nieces and nephews.

Louise attended college for three years at Louisiana State University (LSU) before she was married, not enough time to graduate.  After she married and moved to Michigan, she completed her studies, receiving both a bachelor’s and a master’s degree in Education from Central Michigan University.  She taught first grade as an elementary school teacher in Houghton Lake, Michigan.

After she retired from teaching, Louise moved to the Lansing to be nearer her children.  She first bought a home in the 1980’s and then contracted to build a home on College Road in Holt, Michigan, in the 1990’s.

She was an avid gardener, earning a Master Gardener certification.  One of her favorite projects was growing heirloom beans.  Her poppy plants were a great joy to her, and her Rhubarb plants came from her in-laws in Rodney, Michigan.  She was a member of the Garden Club of Greater Lansing.

Her lifelong interest in sewing morphed from making her children’s Halloween costumes to making quilts.  She was a member in the Quilt Guild and Creative Cut Ups in Holt, Michigan.

A memorial service will be held at 1:00 p.m. Saturday, February 1, 2020, at the Estes-Leadley Holt/Delhi Chapel.  Her family will receive friends at the funeral home from 12:00 p.m. until service time on Saturday.  In lieu of flowers, memorial contributions may be made to the Holt Community Food Bank, Give-A-Kid Projects in Holt, or to your favorite charity in memory of Louise Godbold.

Tom and Sue, we are so sorry to hear this and want to send you great thoughts and memories of your Mom. May God keep you in his loving arms.Love, Steve and Devon

Perhaps you can tell from her picture that mom was a woman who loved life. She lived 99 and a half of them. My prayer is for you to have an eternity of happiness. Rest in peace momma, you will never be forgotten

Mrs Godbold was such a gracious lady! She shared her love of life with family and friends. Her attitude and appreciation of the simple things in life was contagious, made you want to plant a garden! She was a role model for those luck enough to have her in their lives even if briefly.